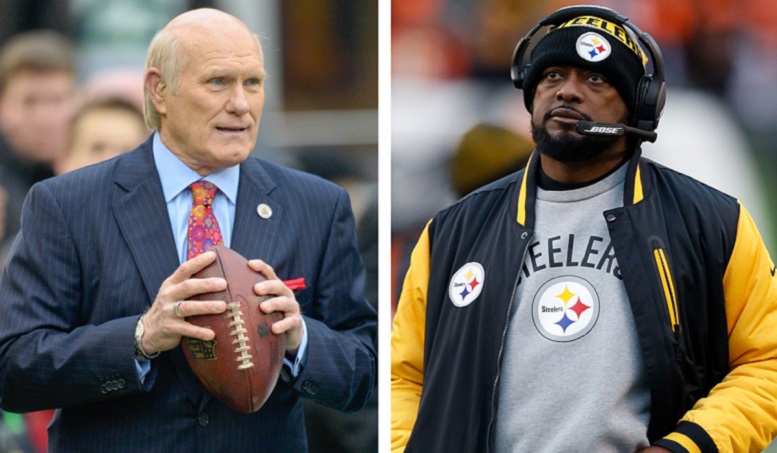 Pittsburgh Steelers Hall of Fame quarterback Terry Bradshaw has been very critical of head coach Mike Tomlin over the years. During his Thursday interview on 93.7 The Fan, Bradshaw was asked to comment again on Tomlin as the Steelers head coach and if the job he did last season changed or reinforced his view of him.

“Well, I don’t know Mike Tomlin,” Bradshaw said. “I called Mike Tomlin twice, he never returned my phone calls. And so, I’d asked Jay Glazer to give me his number, I wanted to talk to him, and I never heard from him. So, that’s cool. He’s a head coach. I don’t have problem with that. The thing in Baltimore when he walked out on the sideline and bumped the return guy, to me was just senseless. That was childish.

“And so, I have had, and you have to understand, I was coached by a no-nonsense coach and so therefore that has a great impact on my view of coaches. Chuck Noll was a no nonsense, in your face, tough ass coach, all right? And I see the chest bumping and all of that. Can you imagine me running over after a touchdown pass and jumping up in the air and me and Chuck chest bumping? So, it was me. Listen to this, it was me having to adjust to the current players and the way they act and the coaches and the way they act. And I did not like a lot of that from Tomlin. I want my head coach to be my head coach.”

Bradshaw had even more to say about Tomlin and the job he did last season to lead the team to an 8-8 record despite not having quarterback Ben Roethlisberger nearly all year due to an elbow injury.

“But I have a couple of friends inside the Steelers who have told me what a wonderful guy he is and so on and so forth,” Bradshaw said. “That has softened me a great deal. And I said this on FOX – evidently you don’t watch Fox – and I said this: I said, ‘I think this year is the finest coaching job that Mike Tomlin has done. Considering what all he’s lost, I thought he did a hell of a coaching job this year.’ And that’s taking everything aside and looking at it from a profession as a head coach. I thought he was fantastic. So, that’s good. So, just goes to show you, if I don’t think it’s good, I’ll say it. If I think it’s good, I’ll say it. So, I thought he did a hell of a job last year.”

Bradshaw does seem to have softened some on his opinion of Tomlin over the years. After all, remember what Bradshaw said about Tomlin way back in December of 2016?

A few days after Bradshaw made those comments about Tomlin, the Steelers head coach was asked to respond to them during his weekly press conference, so he did.

“I appreciate the support, but criticism and critique are very much a part of our business and it’s an element of our business that as a competitor, I embrace,” Tomlin said of Bradshaw’s criticism of him back in December of 2016. “The term “great”, is something that I have a great deal of respect for. I certainly don’t think that my resume to this point reads as great, but very few coaches resumes read as that at this point. Guys like Bill [Belichick] in New England can probably say that, or Pop [Gregg Popovich] down in San Antonio, but I think the rest of us are just working-stiff, to be quite honest with you.”

Tomlin didn’t stop there as he also fired a shot back at Bradshaw for him describing him as a great cheerleader-type of coach.

“Now, with that being said, terms like “cheerleader guy”, to me, maybe fall outside the bounds of critique, or criticism,” said Tomlin. “They probably fall more into the area of disrespect and unprofessional, but what do I know, I grew up a Dallas fan, particularly a [Thomas] Hollywood Henderson fan.”

It’s really not surprising that Tomlin has never accepted or returned and calls from Bradshaw over the years. It’s also not a big deal. Bradshaw’s job is to call things the way he sees them on FOX as a weekly NFL analyst and it’s obvious that Tomlin’s coaching style isn’t one he prescribes to having played for the late Chuck Noll. Hey, at least he praised Tomlin for the job he did this past season. That’s a start.