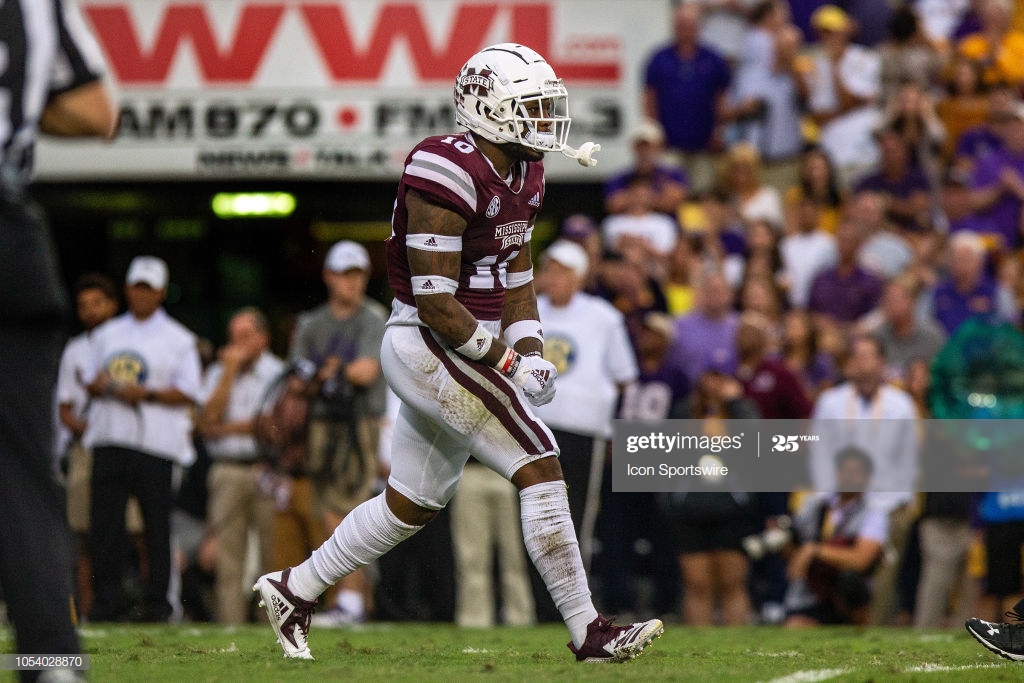 -Good size for the position
-Well-proportioned, strong frame built to hold up inside
-Fills holes with force and does a good job processing quickly to fly downhill against pulling OL
-Decent range for the position with fluid movement skills
-Flashes ability to slip blocks and stay clean

-Soft demeanor for linebacker; rarely shows aggression
-Motor and overall want-to levels are question marks for me
-Allows linemen to climb to the second level on him far too often
-Eyes are consistently slow to processes without pulling OL to key on
-Struggled to stack and shed; overmatched against interior OL
-Does not use his hands well inside; needs to learn to generate more power with them

-Four-year starter at Mississippi State
-Played in 51 career games with 48 starts under his belt as a member of the Bulldogs
-Finished career with 235 tackles, 14.0 TFL, 3.0 sacks, two fumble recoveries and one forced fumble
-Named 2016 SEC Defensive Freshman of the Year
-Competed at the 2020 NFLPA Collegiate Bowl
-Involved in a recruiting scandal as the No. 2 overall player in Mississippi between Ole Miss and Mississippi State

Mississippi State linebacker Leo Lewis certainly arrived in college football with a lot of hype and a ton of controversy, but the former 4-star recruit an top 35 player in the country never quite put it together in four years at Mississippi State.

Lewis certainly looks the part with a rocked-up frame and strong movement skills with decent range, but when he wasn’t able to open it up and run sideline to sideline, he was a bit of a liability in the run game due to his slow processing skills and poor take-on technique.

Against Texas A&M in 2019, Lewis was bullied all over the field but much bigger, athletic linemen that thrived climbing to the second level on him. He doesn’t process very well without a pulling lineman to key on. He searches into the backfield, and when he does that he takes his eyes off of the lineman climbing to the second level. Once he reengages with the lineman it’s too late. He doesn’t have the strength of get-off abilities to make an impact consistently in these types of situations.

I do like the way Lewis fills lanes against pulling linemen on tape. The problem is once he’s there he’s unable to shed or slip the block on a consistent basis to make the play. I don’t think that can really be taught at this point in his career. He simply doesn’t have the strength in his hands to punch and shed bigger linemen.

I like Lewis’ movement skills; when he opens it up he can really fly. The problem is he doesn’t open it up often. His motor is lacking and his want-to is a question mark for me. That said, he has some range. Look at the way he ranges from the far hash to the opposite sideline to run Kellen Mond out of bounds.

You’d like to see him click and close with some urgency here, but I’ll take the range there.

Again, I am thrilled with the way Lewis fills lanes. Look at the stalemate he causes with A&M’s fullback in the hole in short yardage. He won’t back down when he’s allowed to fly downhill.

This is a good rep for Lewis, even if the A&M running back picks up the first down. He needed help here behind him and didn’t receive any. I just love that stalemate right there at the LOS though. That’s fun.

But for all those positive reps filling lanes, you’ll get some bad ones like this one. He lacks pop in his hands, which was very evident here against a pulling tight end. He gets bullied backwards and really doesn’t fight to try and recover for the stop.

Overall, Lewis certainly has a solid athletic profile and has some decent production at Mississippi State, but his tape leaves a lot to be desired. He doesn’t appear strong enough in pads right now to carve out a role against the run, and doesn’t have the production dropping into coverage to be a sub package linebacker. His best route to a roster spot in Pittsburgh is through special teams. He’ll have to seriously work on his motor and overall want-to in pads to earn a spot on Danny Smith’s squad.

All that said, I think he’s worth developing on the practice squad as a future depth piece.