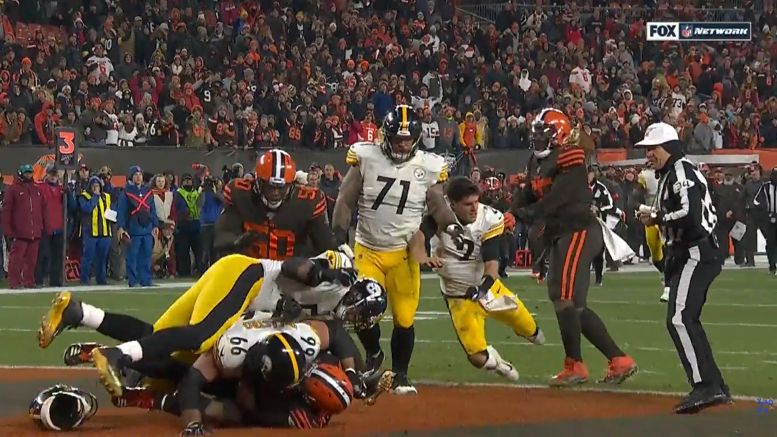 Also of note were the releases of Mark Barron, Anthony Chickillo, Johnny Holton, and Roosevelt Nix, and the retirement of Ramon Foster, as well as three significant signings in free agency, adding a new fullback in Roosevelt Nix, a potential starting lineman in Stefen Wisniewski, and a new tight end in Eric Ebron.

Maurkice Pouncey: Now the longest-tenured Steelers outside of Ben Roethlisberger (though not the oldest), Pouncey is the grisly veteran. One does have to wonder how many years left, and at what level of play.

David DeCastro: At this point, DeCastro is undisputedly the Steelers’ best lineman. He is a consistent performer at right guard. But even he is climbing up there in age.

Matt Feiler: Whether or not he ends up here remains to be seen, but Feiler does have two career starts at guard. He could be the starter at left guard depending on how the rest of the offensive line shakes out. If not, he’ll start at tackle.

J.C. Hassenauer: Essentially the fourth-string center, Hassenauer is the only non-starter interior reserve returning from the 53-man roster a year ago. And he only spent the final game of the year on the 53 after Pouncey was injured in the penultimate game. Signed after Patrick Morris was promoted (and later claimed) when Pouncey was suspended.

Derwin Gray: A seventh-round pick, Gray was a college tackle but played a lot inside in training camp. He needs to be a four-position guy to make the team.

Christian DiLauro: The same can be said of DiLauro, a midseason practice squad signing. He too is guard-tackle-capable, and he’ll need to show that versatility.

Stefen Wisniewski: Signed after Ramon Foster retired and B.J. Finney signed elsewhere in free agency, the 31-year old has over 100 starts under his belt, and will compete to take over at left guard. If not, he’ll be the top interior reserve, including at center.

Ramon Foster: After an 11-year career, Foster announced his retirement earlier this offseason, though whether or not he would have remained in Pittsburgh’s employ is up for debate. Most believe he would have been cut anyway.

B.J. Finney: The top interior reserve for the past four seasons, Finney got a strong offer from the Seahawks that he couldn’t pass up, where he is likely to land a starting job and could make up to $9.5 million over two years.

Make no bones about it, the interior offensive line is as likely an area as any to be addressed by the Steelers with their top pick, 49 overall in the second round. DeCastro, Pouncey, and Wisniewski are all on the wrong side of 30. The Steelers haven’t drafted an interior-capable lineman earlier than the fifth round since DeCastro himself in 2012. And only once in between: Wesley Johnson in 2014.