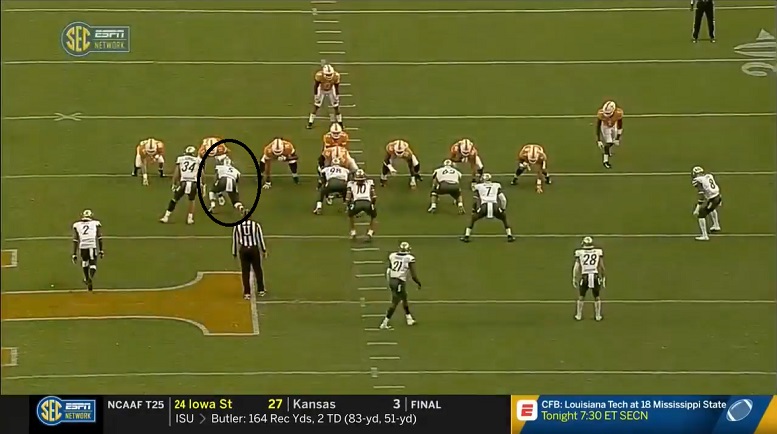 The Pittsburgh Steelers selected Charlotte edge-rusher Alex Highsmith in the third-round of the 2020 NFL draft Friday night and hes coming off a senior season that included him producing 75 total tackles, 21.5 tackles for loss and 14 sacks. Highsmith 2018 junior season wasn’t as productive, however, and especially in the sack department as he registered just 3 sacks all season. During his Friday night post-selection conference call with the media, Highsmith explained why his sack production lacked in 2018.

“So, my junior was tougher for me,” Highsmith said. “My junior year, I didn’t have as many sacks, I played a 4-I that year. So, I was probably defensive tackle. It was harder for me to get sacks that year and pressure the quarterback, but you know, this past year running the 4-2-5 and really just being an edge guy, I felt like that helped me be the best pass rusher and get to the quarterback better. That role really helped me get more sacks and just get more pressure on the quarterback. We got
a new scheme this year and a new coaching staff, so I’m just thankful to coach and the football staff for putting me in that position.”

That quote from Highsmith really speaks volumes and that backs up what our very own Alex Kozora tweeted out Friday night about Highsmith’s 2018 season and lack of sack production. He was used pretty much like a defensive tackle sometimes and like a 3-4 defensive end as well.

The difference? Charlotte let him rush from the edge a lot more. Played a lot of 4i/5 as a junior. Not the case as a senior. Compare the difference. Production shot up because of it. #Steelers pic.twitter.com/amZ5mJoab8

Highsmith also talked about how he was used during his 2018 junior season in a separate March pre-draft interview and that provided more clarity as to why he lacked sack production that year and why it went through the roof in his 2019 senior season.

“I think it was Coach Healy’s decision to hire Marcus West [after the 2018 season] from Minnesota,” Highsmith said in an interview with Chris Rosvoglou. “He’s a great defensive line coach and he taught me different pass-rush moves and techniques. Also, the scheme that we were in helped me as well. During my junior year we played a 3-4 defense, so it was hard to get to the passer that way. This past season we played a 4-2-5 defense, so it was easy for me to play fast and get after the quarterback a lot. That scheme really gave me a lot of freedom.’

As mentioned, Highsmith had just three sacks during his 2018 junior season. It’s worth pointing out, however, that one and a half of those came against Tennessee and on the road. You can see those one and a half sacks below and see how he was lined up in that defense.

Now let’s fast forward to the 2019 Charlotte game against Clemson and the sack that Highsmith had in that contest. As you can see below, he’s being used as a edge-rushing defensive end in a four-man front.

Rushing the quarterback as an edge defender is still relatively new for Highsmith so the fact that he has progressed as quickly as he has is promising. Even so, he’s got a lot to learn still at the NFL level and thus his rookie season in Pittsburgh and how quickly he can develop will depend entirely on him. He’ll need to get stronger in 2020, learn the Steelers defense and continue to improve as a pass rusher and run defender while playing on his feet.

After day-two of the 2020 NFL Draft was over with late Friday night, Steelers general manager Kevin Colbert indicated that 2020 isn’t expected to be a redshirt year for Highsmith when he and head coach Mike Tomlin met the media to talk about the two draft selections made earlier in the evening.

“He’s not going to get a redshirt year,” Colbert said. “I can’t speak for the coaches, but I know Coach Tomlin’s expectation will be that this young man will contribute when he’s ready. Again, physically, he’s 6031, 244-pounds. He can run. Can he get stronger? Sure, they all can. Again, it’s just learning at this level, but I dont think anybody’s going into this as this is a reshirt situation. we’re going to expect him to come in and be able to contribute.”