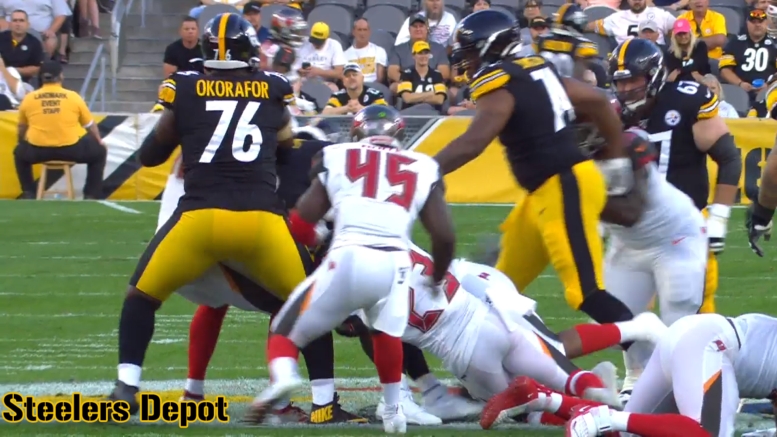 The retirement of Ramon Foster and departure of B.J. Finney make it significantly more likely that the starting right tackle position will be up for grabs once again in 2020, which means that now third-year tackle Chukwuma Okorafor will have a second chance at seizing the job in as many years.

After the team traded Marcus Gilbert last year, the Steelers held a competition to take his place, which was regarded as being primarily between Matt Feiler, who started 10 games there the previous season, Okorafor, heading into his second year, and Jerald Hawkins, a former fourth-round pick who was on injured reserve for two of his first three seasons. Zach Banner was also technically in the mix.

The Steelers signed Stefen Wisniewski in free agency, and he will reportedly be given the opportunity to compete for the starting job at left guard, but if he does not lock that role down, the Steelers are expected to move Feiler over to left guard.

Obviously, in that event, the right tackle job will be open, and it will be expected that Okorafor and Banner will compete for it. While Okorafor has made two starts there over the past two seasons, and Banner has yet to play any meaningful tackle snaps in Pittsburgh, he did serve as the swing tackle last season, and played over 200 snaps as a tackle-eligible, while Okorafor was inactive for the 15 games he didn’t start.

The former third-round pick out of Western Michigan did not show the sort of growth that was hoped for last season, but he was already ahead of where he was anticipated to be as a rookie in 2018, so it wouldn’t be altogether surprising if he can turn himself into a starter in his third season.

Even now, he remains just 22 years old. He has already gone through a change in his position coach, so perhaps the year-to-year stability from his second season to his third will be of aid. Then again, there may not be much of an offseason this year.