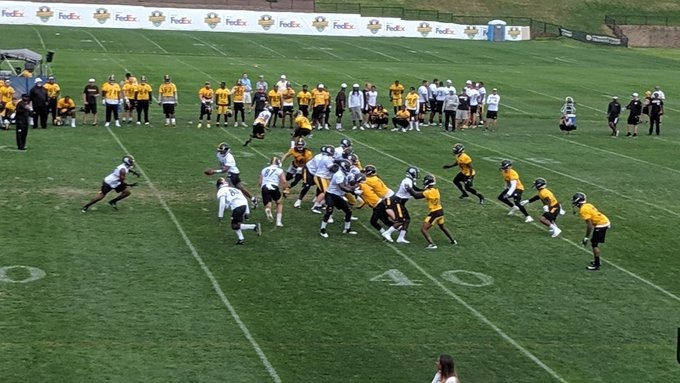 Like it or not, and you know the the organization loathes the idea, it’s almost certain the Pittsburgh Steelers will be chosen to appear on this year’s edition of Hard Knocks.

NFL.com ranked the eligible teams and in no surprise, put Pittsburgh at the top. Here’s what Dan Hanzus had to say:

“They’re the heavy Vegas favorite for a reason. The Steelers are NFL blue blood royalty and come fully loaded with one of the most passionate fan bases in the sport. Let’s face it: Franchises of the Steelers‘ quality don’t show up very often on Hard Knocks. If you apply the current inclusion rules to the entire run of the show (which dates back to 2001), Pittsburgh would have been an option for mandatory inclusion just once before 2020. So NFL Films and HBO have a window here, and it might not stay open long. Throw in Ben Roethlisberger‘s return from a major elbow injury, engrossing human interest stories around guys like Ryan Shazier and James Conner, and the completely inevitable Wiz Khalifa camp visit, and Pittsburgh is a slam dunk No. 1 choice.”

It’s hard to disagree with anything he wrote there. There’s a rare opportunity to showcase one of football’s most storied franchises and there’s so shortage on storylines either. Beginning with Ben Roethlisberger’s return. There’s also the well-loved JuJu Smith-Schuster, the quippy Mike Tomlin, and even a chance to circle back to Roosevelt Nix, who infamously was the first player cut by the Atlanta Falcons years ago captured by the show.

Here’s how Hanzus ranks the other teams:

And yeah, it’s pretty obvious to see what Pittsburgh ranks at the top. None of those teams have the storylines or the fanbase of Pittsburgh.

Of course, the Steelers aren’t enthused by the idea. Everyone at the top of the organization, from Mike Tomlin to Art Rooney II, have admitted they would prefer the cameras to stay away. Here’s what Rooney said earlier this year.

“I know it seems like it’s getting a lot of attention here and it’s one of those things that if we have to do it, we’ll grin and bear it”, he told Stan Savran. “I think if they ask if we’re volunteering for this, we’ll say, no. It’s not necessarily a volunteer-kind of situation anymore as you know.”

For fans, it will be a unique opportunity to view the team behind the scenes. The Steelers are normally close to the vest with their inner-workings. There aren’t many leaks, no signs of chaos, in-fighting, just a team staying the course and steadying the ship in good times and bad. It’ll be a treat to see that curtain pulled back.

Hard Knocks will air on HBO. If you have an NFL Game Pass subscription, you can also watch it there, though I don’t believe those are aired live.