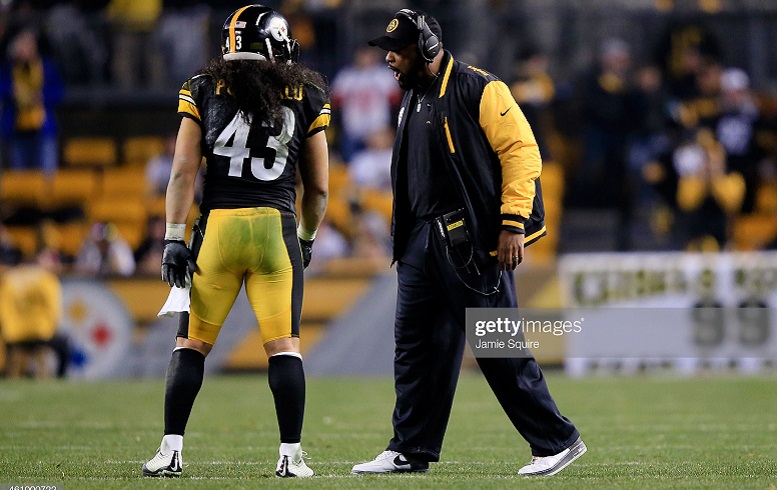 Former Pittsburgh Steelers safety Troy Polamalu will be inducted into the Pro Football Hall of Fame later this summer as a member of the Class of 2020. Additionally, former Steelers head coach Bill Cowher, who was Polamalu’s first NFL coach that he played for, will also be enshrined in Canton, OH as part of that class as well this summer. With Polamalu having played for both Cowher and Steelers current head coach Mike Tomlin during his career, the soon-to-be Hall of Famer was asked during a Friday interview on the ‘Jim Rome Show’ to discuss both.

Polamalu first talked about what it was like playing for Cowher his first four seasons in the NFL.

“Man, I think one of his great qualities, and I’ve been fortunate to have two great head coaches for the Steelers, with Coach Cowher, I think one of his great assets and skill sets is that he really allows each player, each individual, to really be the best versions of themselves,” Polamalu said of Cowher. “And I think that he gave a lot of diverse personalities and the way that he kind of saw it, he kind of saw himself as a father, as I’ve heard him quote, of 53 young men.

“So, for me, it’s to be able to manage all of these young men and to be able to let them be themselves within this blue-collar culture that he had set, and these diverse personalities really just come together. And I think that’s really what his great skill set is, is that he let everybody be themselves, the best version of themselves and brought everybody collectively together.”

Polamalu obviously spent the final eight years of his NFL career in Pittsburgh playing for Tomlin and because of that, Jim Rome asked him on Friday to describe what makes unique and why he thinks he’s had success he’s had with the organization to date.

“I think when you look at, you know, just culturally, socially for our country in the way that it shifts with the way that young millennials is a much different generation than even the generation that I’ve been a part of, I think Coach Tomlin has done a real great job of managing this younger culture moving up through a very traditional sport,” Polamalu said.

“So, the way that he’s been able to reach players is very similar to how Coach Cowher has been able to reach players as well. I think Coach Cowher definitely had much more of advantage because he’s from Pittsburgh, he embodies that blue-collar culture. But for Coach Tomlin, I just think that for him, I think his great asset, too, is to being able to manage this young millennial culture and whatnot.”

That’s very well put by Polamalu on both Cowher and Tomlin. As for Tomlin, I think we really saw just how great he is as a leader of young men just last week when he appeared on First Take to defend Steelers quarterback Mason Rudolph once again from the recently renewed racial slur allegations from Cleveland Browns defensive end Myles Garrett.

While it’s way after the fact at this point, Tomlin probably deserves a lot more credit than he’s received to date for the way he was able to handle former wide receiver Antonio Brown during his final few seasons with the Steelers.

We’re not likely close to being done hearing Polamalu talk about what it was like playing for both Cowher and Tomlin. Even so, I would expect his responses to not alter too much as they’re on the money just as they are now.

Polamalu’s full interview with Rome can be heard below.