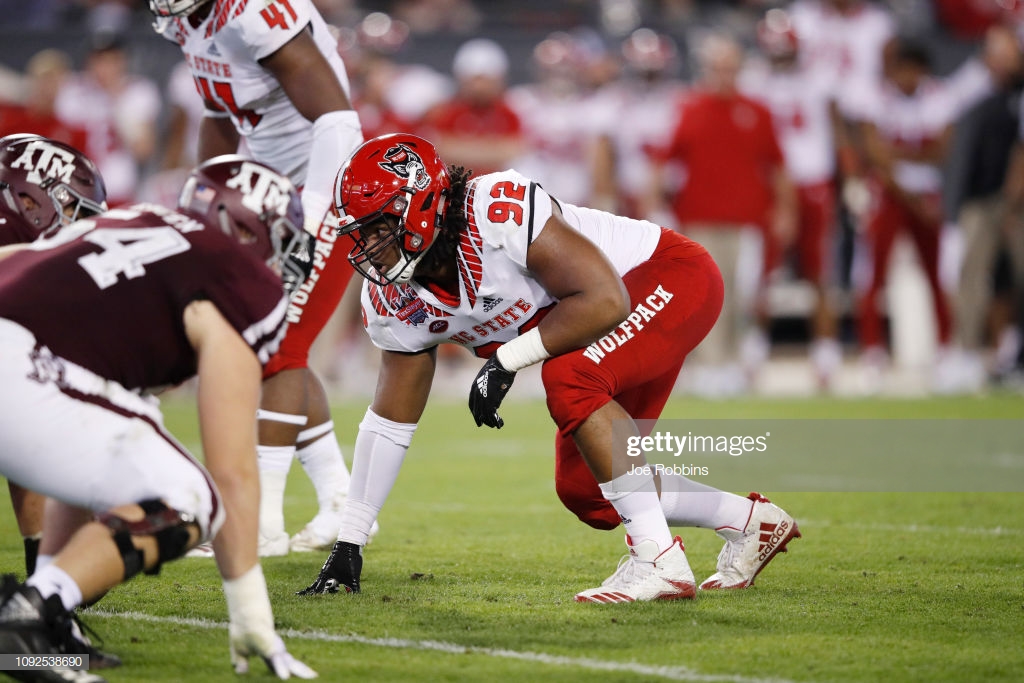 There is no doubting that the Senior Bowl is a great platform for many NFL-ready prospects to boost their stock. It also gives NFL personnel a chance to see many intriguing prospects go up against the best that the NCAA has to offer. For players like NC State defensive lineman Larrell Murchison, a Senior Bowl invite was much more than just an opportunity, it was a dream come true.

NC State did not have the season that they hoped for, finishing 4-8 but Murchison exploded onto the scene last year. With 12 tackles for a loss and seven sacks, the defensive lineman put his name on the map but his work was not done yet. He showed up to Mobile, Alabama still with something to prove to NFL personnel and scouts.

Murchison will tell you that he is comfortable playing anywhere among the defensive line. He can play one technique or three technique though he states he is more comfortable in a three-technique role. No matter where he is lined up, you can bet that he is going to play with great tenacity and aggression.

Tenacity is one word that the senior defensive lineman uses to describe how he plays in the trenches. He plays with the same aggression and determination on every play and it has resulted in 11 sacks over his last two seasons.

“I have that tenacity. I’m aggressive, I feel like I’m going to do whatever it takes to do my job and do it well.”

Murchison credits his family back home and his coaches at NC State for pushing him to the position he has found himself in. A physically gifted athlete, the NC State defensive lineman also points to his ability to learn quickly as a big reason why he was able to produce at a high rate over the last number of years.

“There was definitely a lot that went into (my success), my family back home pushing me, my coaches at NC State and my God-given ability to learn and latch on,” said Murchison.

Murchison has not had an easy route to get to where he is right now but with that same tenacity he shows on the field, he has been able to persevere off the field as well. He initially played at Louisburg, a junior college before transferring to NC State in 2017. As a junior he redshirted his entire year but he used that year as a learning tool. Since then he been a mainstay on the defensive line, playing in 25 games over the last two seasons.

That tenacity used to battle adversity earlier in his career is still alive and well as Murchison is out to prove that he can play anywhere needed in order to help his future team win. He calls himself a tree stump on the field and that can be used to describe his off-field character as well. He does not give an inch to adversity and will follow any advice given to him in order to better himself.

“Off the field I’d say I’m respectful young man who follows the rules and does everything right.”

While Murchison said that he had not spoken to the Pittsburgh Steelers at the time of our interview, he could be a name they look at to bolster their defensive line depth. With the probable departure of Javon Hargrave, the team will have big shoes to fill among their defensive line.

Should they want to ease the loss through the draft, there is a very tenacious defensive tackle from NC State that is willing to do anything to help.