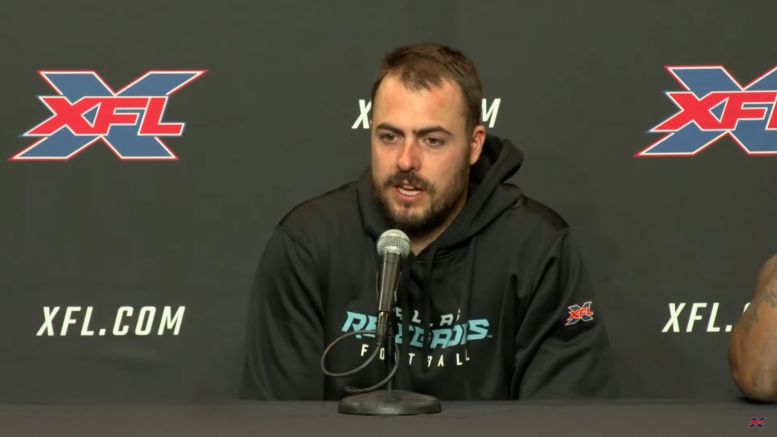 If you were one of the literally multiple people awaiting Landry Jones’ return to the football field for the first time in a couple of years, then you were probably pretty underwhelmed with his debut for the Dallas Renegades yesterday evening. Two years after the Pittsburgh Steelers let him go, Jones threw some meaningful passes again in a winning effort, though he was clearly rusty.

It didn’t help that he threw two interceptions, albeit two that I would argue were pretty good defensive plays, even if not good throws from the quarterback’s perspective. As Charean Williams noted, it was his first game in 777 days.

Jones ultimately completed 28 passes on 40 attempts for 305 yards, throwing one touchdown versus two interceptions. His Renegades were aided by a strong performance by former NFL running back Cameron Artis-Payne, who used to be annoying for the Steelers to play in preseason finales, scoring on the ground twice.

After losing the season opener with a backup quarterback, Jones’ efforts, minus the turnovers, did help the Renegades record their first-ever victory, a 25-18 affair over the Los Angeles Wildcats. After the game, he did not take much relief over the fact that they had won.

“Let’s not sugar coat things. That’s the only way you’re going to get better”, he said of his performance. “We play in a public arena and for all the world to watch, so it’s not a secret that I didn’t play very good today. I’m sure I’m going to get on Twitter and have all kind of haters. A win’s a win. It wasn’t pretty, but we got it done”.

Good on him for being the first to acknowledge the failures in his own play. Now, with that being said, while his two interceptions were critical, he did make a number of nice throws throughout the game. It’s worth keeping in mind that not only is this his first game in years, he is also coming off of a knee injury that he probably isn’t even still 100 percent healed from.

I know there are plenty of people who think that Jones is just flat out not good. I hold the opinion that he has NFL-level talent to be a solid backup quarterback. I feel there is every reason to believe that over the course of the season he will show he is one of the best players in the XFL.

And that of course would be huge for the league. They are getting some quality showings from the position from Cardale Jones and PJ Walker, including some bits of excitement, but the XFL absolutely needs to have some good quarterbacks. Matt McGloin’s showing this past week cannot be the norm.

As though you needed a reminder, Jones was a 2013 fourth-round draft pick of the Steelers out of Oklahoma. He spent five seasons with the team, including the better part of his last three as the direct backup. He was a somewhat surprising release in 2018 following the drafting of Mason Rudolph, with Joshua Dobbs that year serving as the backup before being demoted to number three in 2019 and then being traded.