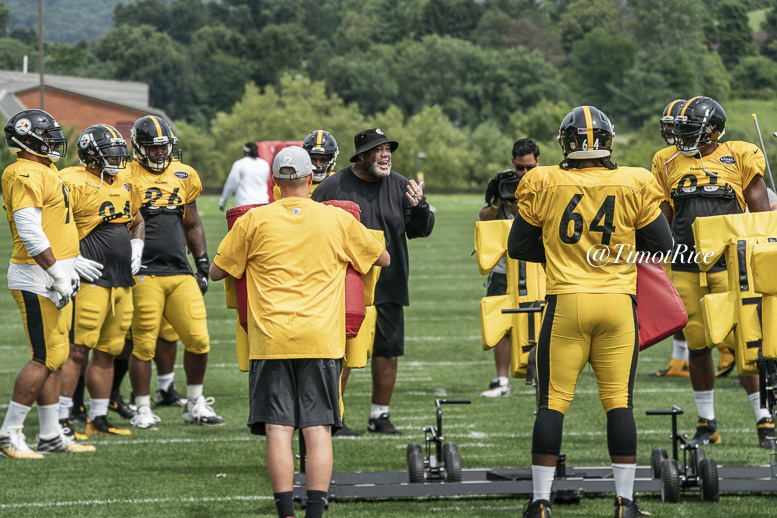 You know one guy we don’t talk nearly enough about on the Pittsburgh Steelers’ coaching staff? Defensive line coach Karl Dunbar. He’s done a terrific job in the two years since coming onboard. And with an offseason to reflect, it’s time we highlight that.

Dunbar was asked to step into some large shoes. Hired to replace John Mitchell. Mitchell, still apart of the organization, was the Steelers’ d-line coach for 23 seasons. A titan, a legend, building the careers of Joel Steed, Aaron Smith, Brett Keisel, Casey Hampton, Cam Heyward, and countless others. He may have been a little feared, known for his blunt, drill sergeant ways, but well respected and taught a master class in how to play defensive line.

Dunbar has done a terrific job being that, to steal Mike Tomlin’s go-to phrase, “next man up.” Here’s what he’s done the last two years.

– Heyward was already an All-Star but has continued his elite play. 17 sacks in the past two seasons, one All-Pro, and some of the best run defense football has to offer.

– Stephon Tuitt finally saw his breakout year, the best player on the 2019 team before getting hurt. 6 TFL, 3.5 sacks over essentially five games.

– Tyson Alualu bounced back for what honestly might’ve been a career year or at the least, the best he’s had in a long time. He became a key cog in the defensive line after Tuitt’s season-ending injury.

– Daniel McCullers has had his best two years in the NFL. Far from great, mind you, and maybe not even serviceable, but Dunbar’s softer approach has gotten the most out of Big Dan’s game. He’s been a more intense, physical, and consistent player.

– Even Isaiah Buggs, coached by Dunbar at Alabama, impressed in limited action during his rookie year.

But Dunbar doesn’t just coach the defensive linemen. Given the Steelers are in sub-package about 70% per year, Dunbar spends plenty of time with the outside linebackers since they’re quasi-ends, especially seeing how little TJ Watt and Bud Dupree dropped into coverage this year. Both were under 10% for the first time in their career.

That information was noted by the PPG’s Gerry Dulac last offseason after the team parted ways with OLBs coach Joey Porter. Keith Butler ended up taking over the title while he and Dunbar coached the position during the year.

“When the Steelers are in their sub-package defenses, outside linebackers T.J. Watt and Bud Dupree are deployed more as defensive ends and are then instructed by defensive line coach Karl Dunbar. Butler would work with the outside linebackers only in those limited situations when they actually line in their base 3-4 defense, which is approximately 20 percent of the time”.

Over the last two years, Watt and Dupree have emerged as budding stars. Watt is already an elite player and will be paid as one of the NFL’s top defensive assets. Dupree finally broke out in 2019 and will cash in, earning less than Watt’s moneytruck but more than say, Hargrave.

And we haven’t even gotten into camp sleepers and preseason darlings like Ola Adeniyi and Tuzar Skipper, two men who will be competing for top backup duties in Latrobe.

Basically everyone Dunbar has touched has turned to gold. It’s hard to pinpoint what exactly about his approach that makes him so effective. But a softer touch than Mitchell has probably helped. Don’t mistake that for setting the bar any lower. The expectation is sky high under his coaching with a focus on technique, hand use, and carrying the torch of Mitchell’s “run to the ball” philosophy.

In the past, Dunbar has talked about his desire to be a defensive coordinator someday. He’s been a defensive line coach his entire career, college and pro. Based on the job he’s done in Pittsburgh, he’s worth consideration even if he’s not a name I’ve seen suggested.

He’s been one of Tomlin’s sneaky good hires over the past decade. The NFL should take notice and come calling but until then, be thankful for having Dunbar on the Steelers’ side.