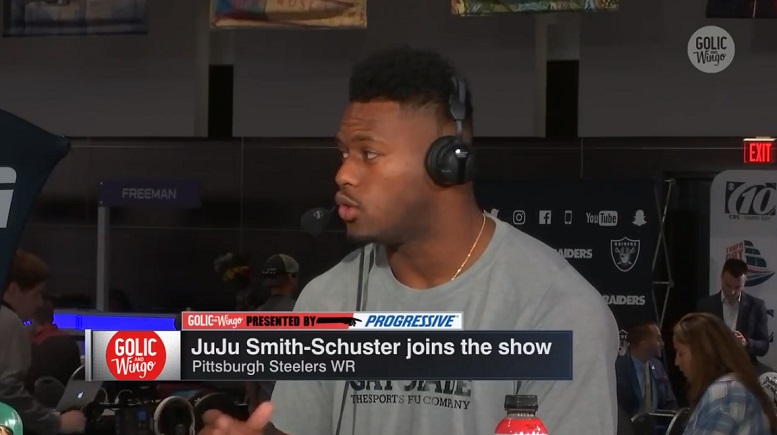 Pittsburgh Steelers wide receiver JuJu Smith-Schuster certainly had a rough 2019 season as not only did he have a few injuries to deal with, he also had to adjust to two inexperienced quarterbacks along with going through the trials and tribulations that went along with him being the team’s new number one wide receiver following the offseason departure of Antonio Brown.

While Smith-Schuster now appears to be back fully healthy again, judging by the early offseason videos he’s been posting on social media, he admitted in an interview on ‘Golic and Wingo’ during the week of the Super Bowl that he’s still learning how to be a number one wide receiver in the NFL.

“When you’re the dude on the team that everyone focuses on, you know, you face the best corner, you faced the best of the best, you get the double teams,” Smith-Schuster said. “And, you know, that’s something I have to get used to throughout the season, throughout the week. And it’s tough, man. When you have a quarterback who’s a Hall of Fame quarterback, who can change plays, make audibles and put you in a best position, it makes things a lot easier.”

Smith-Schuster was also asked during his interview last week to talk some about how difficult it can be from a quarterback/wide receiver perspective after quarterback Ben Roethlisberger was lost for the season in Week 2 for him to have to deal with backups Mason Rudolph and Devlin Hodges needing to play at different times throughout the remainder of the schedule.

“You know, playing with Ben, like, the big difference is like my expectations are already high from the get-go,” Smith-Schuster said. “So, when I’m playing with like Mason and Devlin, I’m like, okay, it’s a lot different now cause they’re not Ben, But at the end of the day, you know, you make adjustments, you work on it throughout the week and you try to go out there, make plays and put a show on the screen.”

Smith-Schuster’s 2019 season didn’t get off to too bad of a start and especially in the six quarters that Roethlisberger managed to play before being lost to his elbow injury. In those six quarters, Smith Schuster caught eight passes for 105 yards from Roethlisberger.

Once Rudolph took over for the injured Roethlisberger, Smith-Schuster still managed to catch 13 passes for 190 yards and two touchdowns from the Steelers second-year quarterback in what was the equivalent of three full games over the span of Weeks 2 to 5. Smith-Schuster also had a nice showing against the Miami Dolphins in Week 8 with Rudolph at quarterback as he caught five passes for 103 yards and a touchdown in that Monday night contest at Heinz Field.

While Smith-Schuster seemingly had an initial good rapport with Hodges early in the season when the rookie undrafted free agent quarterback had to play in place of a concussed Rudolph, that didn’t last long. After Hodges relieved a struggling Rudolph in the second half of the Steelers Week 13 game against the Cincinnati Bengals, Smith-Schuster caught just two passes from the rookie quarterback before being sidelined multiple weeks by a concussion and knee injury.

Once Smith-Schuster returned to action in Week 16, he finished out the final two games having to deal with both Rudolph and Hodges seeing playing time at quarterback and closed out those last two contests by catching just four passes for 28 yards on 10 total targets.

It might come as a surprise to several of you reading this to learn that Smith-Schuster was only on the field with Hodges for 127 offensive plays in total during the 2019 season and only 73 of those were pass plays. 50 of those total 127 plays came in the Steelers Week 6 road game against the Los Angeles Chargers and 37 others came in the finale against the Baltimore Ravens.

Assuming Roethlisberger can adequately return from his elbow injury in 2020, Smith-Schuster should be able to have rebound season as well. The Steelers other two young wide receivers, James Washington and Diontae Johnson, will both also have more experience and hopefully that will somewhat help Smith-Schuster function better as the team’s No. 1 wide receiver in 2020, his fourth season in the NFL.

“It was tough this year, you know, without Ben [Roethlisberger], but you know, hopefully throughout the future it’ll be a lot better,” Smith-Schuster said last week.