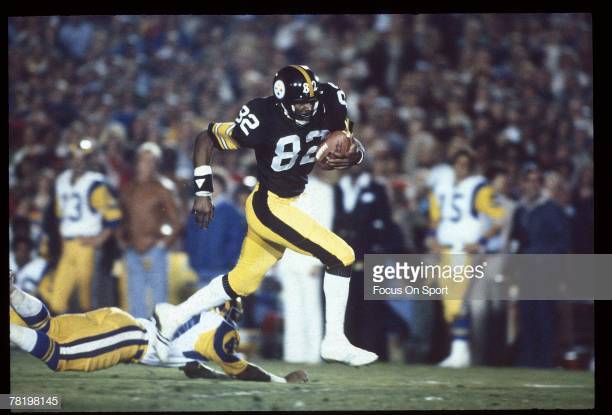 John Stallworth completed the Pittsburgh Steelers’ dynasty. His 73 yard touchdown in the 4th quarter against the Los Angeles Rams in Super Bowl XIV put Pittsburgh on top for good as they hoisted their fourth Lombardi, the final of the 70s.

Stallworth recently sat down with Stan Savran for a lengthy, absolutely must-watch interview that delved into his entire playing career. When it came to Super Bowls, Savran asked Stallworth to take him through the play. In the huddle, it was called 60 Prevent Slot Hook & Go.

There’s one heck of a story that comes with it.

But Stallworth admits he wasn’t confident about the play working during the game.

But with the Steelers’ offense struggling in the first half, Chuck Noll turned to it in the second half.

“Second half, Chuck decides to put the play in. He realizes we’re not going to beat them playing conservative, medium route football. My route as a slot receiver was to go down, fake the hook, hopefully someone would bite on that, and go deep. Most likely it’s the inside guy who’s going to do that. So I ran the route, we called it, I’m not thinking this is going to save the day. It never works in practice. I’m thinking we’re going to run it and we’ll see what happens.”

He says he basically forgot to fake the hook aside from an unconvincing nod to the inside. But he was fast enough to run past the inside defender, leaving only the outside DB in position to make a play downfield. All Terry Bradshaw needed to do was make a perfect throw.

That wrong-shoulder throw may have been what allowed the catch, touchdown, and Super Bowl victory to happen.

“Had Bradshaw thrown the ball where I thought it was going to be, or where it likely should be, I think that guy knocks it away.”

The defender believed the ball was going to land to the inside, upfield shoulder. It didn’t, he never saw it, and Stallworth made the adjustment to the outside to make the catch and run into the end zone.”

You probably know the play by heart but here’s a visual to put to Stallworth’s words.

That score put the Steelers up 24-19. Franco Harris would add on a one yard touchdown to salt the game away, giving Pittsburgh four Super Bowl victories in in six seasons. Stallworth finished the game with three catches for 121 yards and that amazing score. Bradshaw, despite throwing three interceptions, was ultimately named MVP.

If you have the time, it’s a 40 minute interview, but worth checking out for your car ride home. Here’s the link to the conversation.