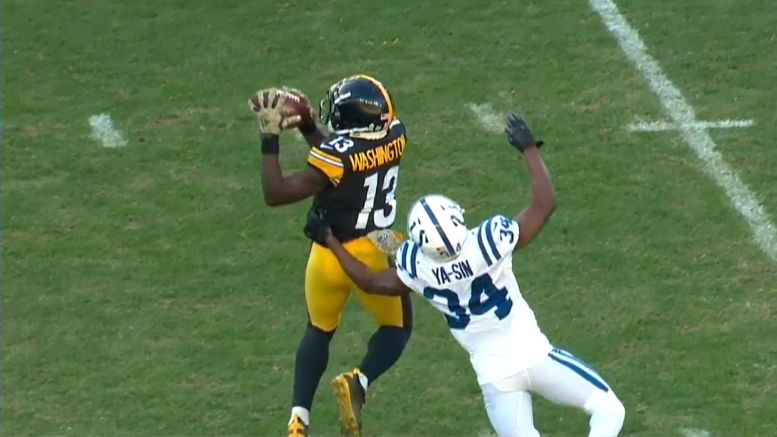 Though the Pittsburgh Steelers’ offense struggled in the worst way, James Washington found a way to take a key step forward. He experienced the breakout sophomore campaign the team was hoping for, finishing with 44 catches for 735 yards and three scores.

That averages out to nearly 17 yards per catch. In the Kevin Colbert era, that’s one of the best figures for any Steelers’ deep threat. Here are the top ten Steelers in yards per catch since 2000 (minimum 40 receptions).

Washington slots into seventh place on the list. And keep in mind Washington had the worst QB play of the list, still finding a way to thrive and make big plays.

His ability to win vertically is different than say, Wallace. Washington isn’t a 4.4 burner. He ran a middling 4.54 at the Combine. But his physicality, hands, and ability to time his jump and fight for the ball makes him an asset down the field.

Of course, this shouldn’t come as a surprise to fans and certainly not to the team. Washington has always been a playmaker. At Oklahoma, he averaged 19.8 yards per catch over his career. As a senior, he bumped that up to nearly 21 yards per catch. Pittsburgh drafted him to be that non-traditional vertical threat.

After a terrible rookie year that led to fair questions about Washington’s selection, he’s calmed many of those concerns in 2019. Now, he’ll have Ben Roethlisberger and 2020. That certainly won’t hurt his chances of looking and playing even better.

Adding another explosive threat to the offense during the offseason, likely through the draft, is never a bad idea. Having too many playmakers is like having too many Ferrari’s in your garage. No such thing. But despite how miserable the offense was under Mason Rudolph and Duck Hodges, it’s easy to lose sight at how much Washington grew. He proved to be a legitimate big play threat, another reason why the team could and should focus on a slot receiver to help in the middle of the field.