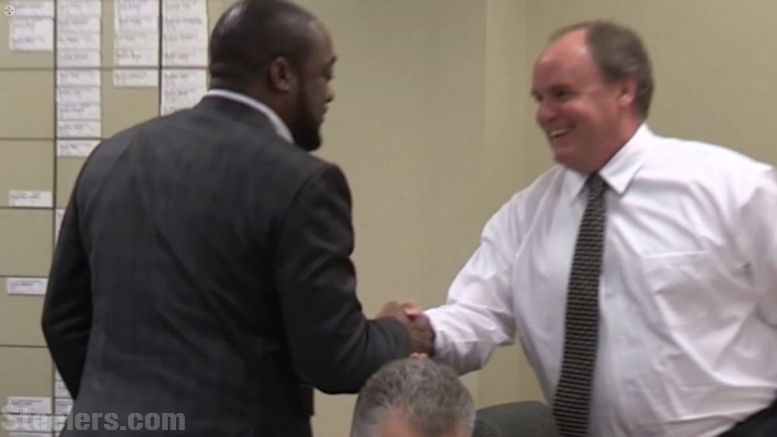 For the first time in over 50 years, the Pittsburgh Steelers are going into a draft during which they do not have a first-round draft pick. In the decade or so prior to the team hiring Chuck Noll, they had made it a habit of dealing their draft picks, particularly their top pick, in exchange for high-profile stars who were on the downside of their career.

Noll and Dan Rooney quickly put a stop to that, and in just a few short years built a championship team through their draft resources, hitting home runs in the first round on players like Joe Greene, Terry Bradshaw, Lynn Swann, and others.

But that’s not what they did with their first-round pick this time around. General manager Kevin Colbert and company only gave it up because they knew they could get a long-term fixture. They sent their top pick to the Miami Dolphins in exchange for safety Minkah Fitzpatrick, who was the 11th-overall pick in the 2018 NFL Draft, and a player they highly coveted.

Colbert was asked yesterday by Missi Matthews if not having a first-round pick affects the team’s preparations for the draft, given that they will not have any selections until the middle of the second round.

“When we go into the draft preparations, if we’re picking, the highest we’ve ever picked was eighth, so 32, it doesn’t change the preparation”, he said. “We’ll still evaluate the player we think will get picked number one the same as we will the player getting picked 256. It doesn’t really change it.

“It’ll be a little different on that Thursday night when we don’t have a pick, and really we can just sit and watch tv for three hours”, Colbert added jokingly. “That’ll be different. But we’re not dissatisfied with that because we think we have a great player in Minkah Fitzpatrick”.

In 14 games with the Steelers, Fitzpatrick recorded 57 tackles, five interceptions, nine passes defensed, one forced fumble, and two fumble recoveries. He scored two defensive touchdowns, and was named both a Pro Bowl starter and a first-team All-Pro.

A starting safety was going to be the team’s top need in 2020 anyway, with the anticipated departure of Sean Davis, and nobody in the wings, so the Steelers simply got that out of the way early, with a proven commodity that has two years of experience under his belt heading into the next season.

Still, it will be a slog for Steelers fans to watch the first round of the draft in a couple of months, watching all the names slip by of the players they could have taken, if not for the trade. Of course, they will only need to remind themselves of what they already got instead, which is arguably a player who is already better than any they are likely to have gotten at 18.