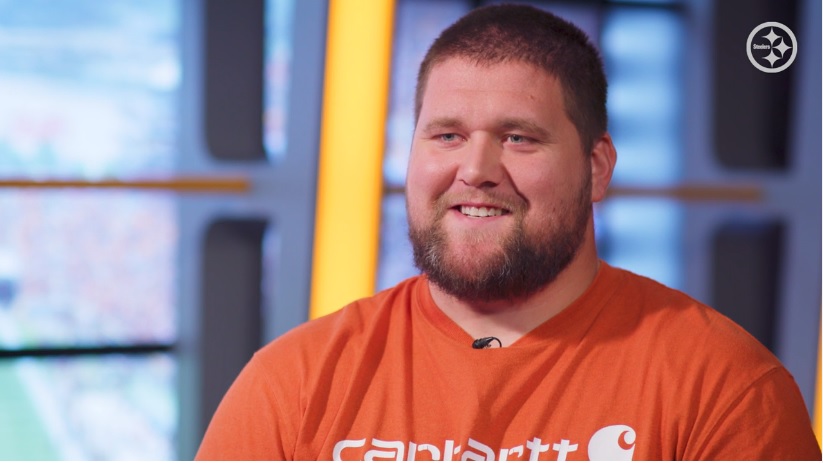 Though the odds of BJ Finney donning a Pittsburgh Steelers’ uniform in 2020 don’t look very good, ask Finney and he’d love to re-sign with the organization. Sitting down with Steelers.com’s Missi Matthews, he was asked if we would like to remain in black and gold.

“Absolutely,” Finney said. “We’d love to stay. My wife and I love it here. The amount of people we’ve got to meet. The city, we love the city. The people in the organization. We really love it.”

Pittsburgh, you might recall, were his childhood team. There was a semi-viral moment when he signed as a UDFA with the team after the 2015 draft and the uproar from family and friends upon a teary-eyed Finney announcing the news.

Since then, Finney’s made the all-too familiar climb with Steelers’ undrafted players like Chris Hubbard, Alejandro Villanueva, and Matt Feiler. He spent 2015 on the practice squad before competing for and winning a roster spot the following season. He would go on to start three games that year. Finney emerged as a top interior backup capable of playing center or guard and logging time at both positions over the years.

In all, he’s made 13 career starts and has put on good tape for the rest of the league to see, especially at a time where good o-line play is so difficult to find.

That fact makes it likely Finney is playing elsewhere next season. The Steelers don’t have the money to re-sign Finney to a starter-like contract and there will surely be a better opportunity to start on another team. It’s an almost identical situation as Hubbard, who signed a long-term deal with the Cleveland Browns to be their starting right tackle.

Perhaps Finney reunites with Mike Munchak in Denver, a team with a clear need for offensive line help. Regardless of the landing spot, the odds are low Finney remains in Pittsburgh. That means the Steelers’ depth will be tested again and they’ll certainly be forced to find a low-level free agent and/or draft pick to make up for his loss. We’ll have a list of offensive linemen to look at in free agency in the near-future although fair warning, none of them will be as talented as Finney.