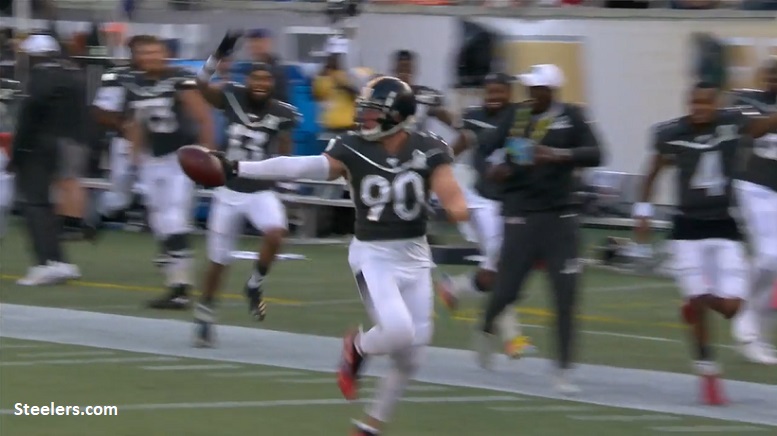 The AFC beat the NFC 38-30 in Sunday’s 2020 Pro Bowl in Orlando, FL and all four Pittsburgh Steelers players who played in that contest registered some sort of defensive stat and one even scored a touchdown.

Steelers outside linebacker T.J. Watt returned a fumbled football 82 yards for a touchdown with 10:29 left in the fourth quarter of Sunday’s Pro Bowl and cornerback Joe Haden intercepted a pass from Dallas Cowboys running back Ezekiel Elliott with 1:28 left in the third quarter. Steelers safety Minkah Fitzpatrick was credited with a tackle and a pass defensed in his first Pro Bowl appearance while defensive tackle Cameron Heyward was also credited with one tackle and a pass defensed in Sunday’s AFC Pro Bowl win.

Watt’s fumble recovery for an 82-yard defensive touchdown came after Minnesota Vikings quarterback Kirk Cousins was stripped sacked by Jacksonville Jaguars defensive end Calais Campbell. Watt scooped up the loose football at the AFC’s 18-yard-line and ran untouched 82 yards for the score. He playfully taunted a chasing Cousins with the football on his way to the end zone.

Haden also was credited with two total tackles in Sundays Pro bowl to go along with his interception.