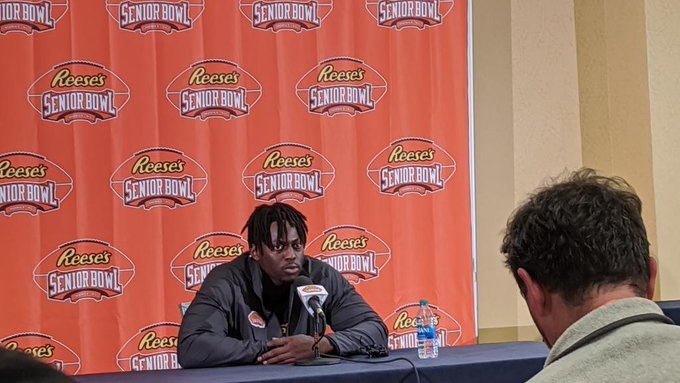 In the moment, South Carolina’s Javon Kinlaw figured his childhood was the same as everyone else’s. Looking back, he realizes just how tough it was. That upbringing helped shape him into the man he is today, bringing him to Mobile, Alabama for the 2020 Senior Bowl.

Living in Washington DC, Kinlaw says he was essentially homeless at times growing up. Bouncing around, living in basements, his family doing anything necessary to get by.

“My mother from Trinidad and Tobago and my two older brothers,” Kinlaw said at the Senior Bowl’s opening press conference Monday. “Just growing up in Northeast Washington DC. Pretty much homeless. Living in basements. We went without electricity. No water, things like that. We had to use the neighbor’s hose to fill up totes of water. We would take them back in the house. We had gas, a gas stove, you’d light a match, boil the water, mix it with some cold water, take a shower like that.”

He began his college career at a JUCO, attending Jones County Junior College in Mississippi, where the big defensive linemen got to eat like one. After the first couple days, at least.

“Fun fact. My first two days there I didn’t even eat. I didn’t know where the cafe was at. And I didn’t know the food was free. Once I found out it was free, I was going crazy.”

He’s now motivated by having a better life, not just for himself, but his young daughter.

“I just want her to know that I will always be there for her. She’s an important factor in my life. She’s apart of the reason why I play the way I play…I just want to show people it’s ok to be a good father. These young fathers, I just want to show them it’s ok. You don’t gotta be scared. You just gotta do what you gotta do.”

And the way he plays? To say he has an edge is an understatement. He could fill a trophy case with all the team awards he won with the Gamecocks: Defensive MVP, Most Productive, Tenacity Award, the list goes on. You start to wonder if we’re talking about Javon Kinlaw or TJ Watt.

Stats might not tell the whole story, only 10.5 career sacks, but he demanded double-teams, something that’s evident when you put on the tape.

But Kinlaw’s game isn’t about playing with reckless, unfiltered abandonment. He has a checklist of things to watch pre-snap, clues that’ll tell him what the offense is about to do.

“I look for splits. I look for weight distribution. I look to try to see if he’s pulling or not. Some guys, you can look at their eyes and that’ll give it away. Not the good ones. Just look for body positioning. I just try to look for those little, subtle things.”

Truth be told, he’s probably not in the mix to become the next Pittsburgh Steeler. He’s unlikely to get out of the first round, let alone fall down to #49. Rooting for him to wear black and gold is probably a pipe dream. But file Kinlaw as one of the soon-to-be NFL’s good dudes and one to root for wherever he ends up. Much of the NFL news cycle focuses on the negative, Steelers’ Nation is all too familiar with the notion, and that’s not going to change. Negative sells, even if that’s an unfortunate reality.

But stories like his illustrate 99% of football is made up of good players and even better people, ones using this game as an escape, to grow, become secure and give the next generation the childhood they didn’t experience.

That starts here, beginning with Tuesday’s practice, in Mobile.