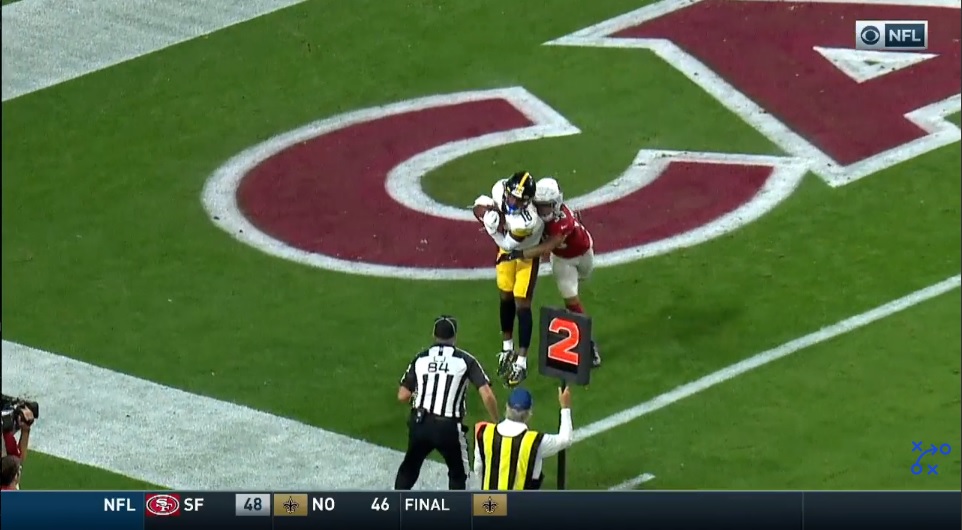 Following each game in the 2019 Steelers season I will be giving you my 10 takes.  These aren’t going to be hot takes and meant to shock the world. This will be instant reactions to the game written while still in that period just following the game when the emotions are high and the ideas are fresh. Included will be thoughts, observations, queries and reasons that caused me to yell at the television.

1. Best of the Year? – I can’t remember a better first quarter this season. Everything was going well.  The offense scored points on the opening drive. It was only 3 but we’ll take what we can get.  The defense was dominant getting 2 sacks and allowing 15 yards of total offense. Special teams made two nice plays on kick coverage with Tyler Matakevich and Johnny Holton making big plays and Diontae Johnson took a punt return back for a touchdown.  Until the Benny Snell fumble and the momentum shifted.  Still a great quarter overall.

2. 40 > 38 – In the running game, it’s time for Kerrith Whyte to get more touches than Jaylen Samuels. Whyte has some juice, more than any back on the roster and he received 5 carries for 41 yards. Samuels received seven carries and had 16 yards. I really feel like it’s a waste of a down running the ball with him.  I love Samuels as a receiver and he has great hands so throw him the ball but no more carries.

3. Banner Pumped – We were that close to seeing Zach Banner get a pass thrown his way. He was blocking, released late and was open. Devlin Hodges looked his way and pumped and at the last second changed his mind and left the pocket on a scramble. I was looking forward to seeing a linebacker or defensive back coming up to tackle him.

4. Have a Day, Diontae – After arguably his worst game last week Johnson bounced back in a big way this week. It started with the punt return for a touchdown. He made something out of nothing on a pass behind the line of scrimmage to gain 14 yards. He had a catch on 3rd and 14 for first down. He ran an end around for 16. Big plays all day.  He finished with 6 receptions for 60 yards which equaled his total from the last three games combined and added a touchdown. Welcome back, DJ.

5. Cage the Cardinal – The defense did a fantastic job containing Kyler Murray. Bud Dupree and Terrell Edmunds made big plays early not allowing him to get out on the edges. Minkah Fitzpatrick had another play in the red zone to keep him in check. The pass rush did a great job of forming a box around him holding him to less than 200 yards of total offense. The defense added four more sacks and had him running for his life on some others. Impressive planning and execution by the defense.

6. Fichtner’s Fascination – I’m willing to bet he has a drawer full of clothes he’s had for 30 years because he likes them. When Randy Fichtner finds a play that he likes, and it works once, he’ll go back to it almost immediately. On the second to last drive, on 3RD and 2 he had James Washington and Johnson run double slants on the right side. Hodges hit Washington for an 8 yard gain. Three plays later on 3RD and 8 Fichtner calls was looks like the same double slants and understandably the defense was ready for it. Mix it up a little, Randy.

7. Squished Berry – I don’t know who called it. I’m willing to bet Mike Tomlin will say it was his choice whether it was or not to protect his coaches. The fake punt call was confusing. To that point Berry had kicked a 66 yard punt and another inside the 20. He’s having his best year to date. You’ve got a 10 point lead and you can pin the Cardinals deep in their zone with about eight minutes to go in the game. The chance of succeeding there is low, just kick it away. My feeling was since the Cardinals had executed a fake punt, they didn’t want to be outdone so they tried one as well. Poor choice.

8. Two Minute Mourning – Another case of overthinking the game. Two minutes left, its first and goal and your opponent has 2 timeouts.  The Steelers choose to run it outside for minus 3, then throw a pass and followed by another run. Just run the ball into the middle of the line twice to get them to use the time outs. After you run your third play, kick the field goal and kick off they would have had about one minute left.  It didn’t hurt them this time but leaving and extra 40 seconds on the clock could hurt them at some point.

9. Special Credit – They have shown life in the past couple weeks. The special team’s coverages units have looked much improved and they deserve some credit. Leading the pack is Matakevich who coming into the game was second in the NFL with 12 special teams tackles and he had his 13TH today. He’s not alone. Jordan Dangerfield is tied for 5TH with 10, Holton is tied for 7TH with 9 and Robert Spillane is tied for 17TH with 7 and this was only his fifth game. It’s a big part of the game that often gets overlooked so kudos to the coverage teams.

10. Would We Be as Happy? – I don’t know about you but I’m pretty happy with the Steelers record. They have scrambled with the roster using their own practice squad and poaching from others and have scratched out 8 wins. What if…Ben Roethlisberger never got hurt? All the other roster issues were the same but Big Ben is healthy. Would you be happy with and 8-5 record at this point?

In the preseason, CBS Sports predicted 11 wins, Bleacher Report had 8, Sporting News had 10, ESPN had 8.5 and Sports Illustrated had 10. The Steelers are already in the range of 8 – 11 wins. Would we be feeling differently about this season if a Ben led team had 8 wins at this point in the season? My thought is yes.