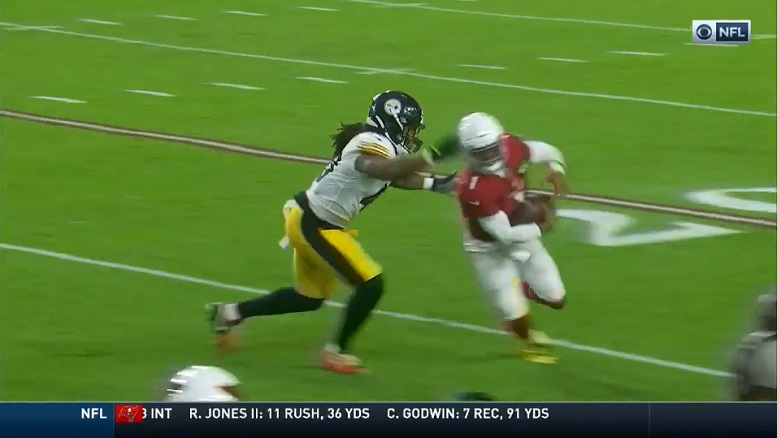 “You know, I just think guys evolve, man,” Tomlin said. “I think it’s reasonable when a guy’s in his mid-twenties and he’s healthy, to play the best ball of his life, He has both youth and experience and I think that’s what you’re looking at in the form of Bud Dupree. But I think you’re looking at that, you know, in the form of many potential people that you could cite.”

Tomlin mentioning health during his response is quite interesting and perhaps a confirming nod to the fact that while Dupree did only miss one game over the course of the last two seasons, that maybe the seemingly nagging shoulder injury he dealt with during a portion of that span of time severely hampered what he could do as a pass rusher.

Whatever the reason is for Dupree’s extraordinary increase in quality of play this season as a pass rusher, it’s very noticeable. Dupree is now using speed to power to win weekly in games and showing us some nice pass rushing counters along with perceived plans. We’ve not seen any of that before this season and that even dates to his college career at Kentucky. He’s become one the NFL’s best edge-rushers this season.

Against the Arizona Cardinals this past Sunday, Dupree registered five total tackles, three of which resulted in lost yardage, a sack, a quarterback hit. One of those tackles for a loss happened early in the game as Dupree fought off a block to track down Cardinals quarterback Kyler Murray along the sideline. While Dupree has always played well against the run, that tackle for loss of Murray on Sunday might have been one of his best run stops of his career.

On Sunday, Dupree will face-off against Buffalo Bills left tackle Dion Dawkins and it will be interesting to see how he fairs against the former second-round draft pick out of Temple, who has struggled in a few games this season. Dupree has a chance on Sunday to hit double-digit sacks and that will be a huge accomplishment for him on his quest to become one of the NFL’s most sought-after free agent edge-rushers in 2020. With a solid final three regular season games, Dupree might can double his single-season career high in sacks, which is six. Now that’s evolving.

Bud Dupree use a stun gun on the LT on the sack? lol Sat him right down. #Steelers pic.twitter.com/1eZIMsgc45