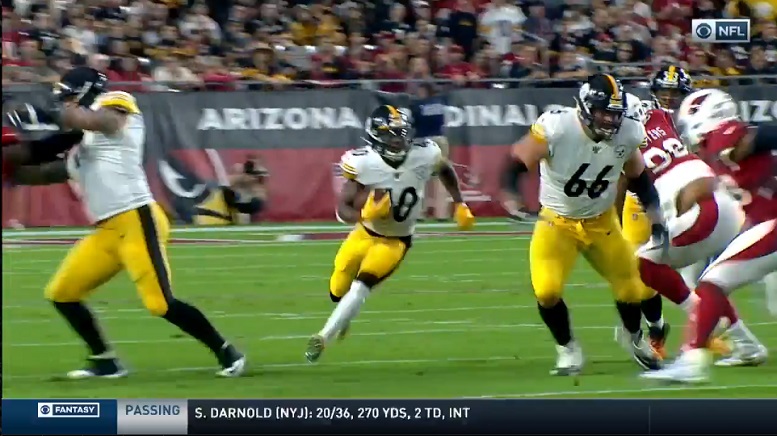 Pittsburgh Steelers running back Kerrith Whyte Jr. has really hit the ground running so far in the three games he’s played in since being signed off the Chicago Bears practice squad as the rookie out of Florida Atlantic has already amassed 100 total yards from scrimmage in his limited playing time. On Tuesday, Steelers head coach Mike Tomlin asked to comment on what he’s seen out of Whyte so far through three games played.

To date, Whyte has played all of 23 offensive snaps with the Steelers and has 15 total touches for 103 total yards. Nine of those 15 touches resulted successful plays as well. Despite his limited playing time in his first three games, Tomlin indicated on Tuesday that Whyte stands to improve some before the regular season is over with.

“Hopefully he’s getting better rapidly,” Tomlin said Tuesday of Whyte. “I think it’s a reasonable expectation when a guy is at the infancy of his career to expect substantial gains as he steps in stadiums, particularly week in and week out. So, guys like him that’s getting an opportunity to play week in and week out, it’s reasonable to expect, not only us to get to further know them and what they’re capable of, but also it’s reasonable to expect that to improve and improve rapidly.”

While Whyte might seem like a natural from a ball carrier standpoint, Tomlin made it clear on Tuesday that it’s still unknown how good or bad the rookie running back is as a pass catcher out of the backfield and as a pass protector.

“You know, it’s really irrelevant whether or not he’s capable in that area or not,” Tomlin said of Whyte’s abilities to pass catch or pass protect. “We’ve got some guys that really are that are available to us. Jaylen [Samuels] has been really solid in that area. [Trey] Edmunds has been really solid in that area. And so that growth will only be challenged or really needed if some of those guys are less than available. Hadn’t evaluated him in that area because really we just had issues in other areas that have been more prominent.”

In addition to Whyte playing sparingly on offense for the Steelers since his arrival in the middle of November, he’s also become the team’s kickoff returner. To date he’s returned six kickoffs for 112 yards with a long of 34 yards, which is already the team’s longest return of the season.

Whyte has averaged nearly eight offensive snaps played per game since his arrival and while the Steelers hope to get starting running back James Conner back from his shoulder injury on Sunday, it’s a good bet that the rookie running back will still see at least five snaps a game the remainder of the season.

“Guys like him [Whyte] and Deon Cain have got an opportunity to really get better in a short period of time because that’s a natural thing,” Tomlin said Tuesday.