The Pittsburgh Steelers will play the (9-4) Buffalo Bills Sunday night at home with the No. 5 seed in the AFC up for grabs and they opened Monday as consensus 1.5-point favorites in that contest, according to Sports Insights.

The Bills, who are currently the No. 5 seed in the AFC, lost 24-17 at home on Sunday to the Baltimore Ravens. That was the Bills first loss since Week 10 when they lost to the Cleveland Browns.

In Sunday’s loss to the Ravens, Bills quarterback Josh Allen completed just 17 of his 39 total pass attempts for 146 yards with one touchdown and no interceptions. He was sacked six times by the Ravens defense in that game and hit a total of 12 times. His lone touchdown pass in that game went to wide receiver Cole Beasley from 3-yards out with 7:00 left in the game.

For the season, Allen, the Bills first-round draft pick in 2018, has completed 59.8% of his 405 total pass attempts for 2,737 yards with 17 touchdowns and eight interceptions. He’s been sacked 33 times this season and has rushed for 439 yards and another eight touchdowns.

The Bills leasing pass catcher after 13 games is wide receiver John Brown, who has caught 64 passes for 908 yards and five touchdowns so far this season. Beasley isn’t too far behind Brown with 59 receptions for 664 yards and six touchdowns.

Defensively for the Bills, linebacker Tremaine Edmunds leads the team in total tackles with 97 to go along with 1.5 sacks, one interception and 8 passes defensed. Defensive tackle Jordan Phillips leads the Bills in sacks with 7.5 through 13 games played and cornerback Tre’Davious White leads Buffalo in interceptions with four and passes defensed with 15.

While the Bills have won nine games already this season, only one of their wins came against a team that had a winning record at the time they played. That team was the Dallas Cowboys and on Thanksgiving.

The Steelers and Bills have met each other 25 times (including 3 postseason games), with Pittsburgh winning 16 games and Buffalo winning 9 games. The Steelers are 10-2 all-time against the Bills at home and head coach Mike Tomlin is 4-0 against Buffalo for his career. The Steelers last lost to the Bills in 1999 and in Buffalo. The Bills last win in Pittsburgh against the Steelers came in the 1992-1993 playoffs and in the Divisional Round. 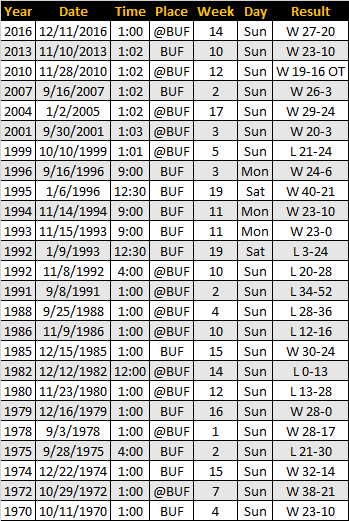