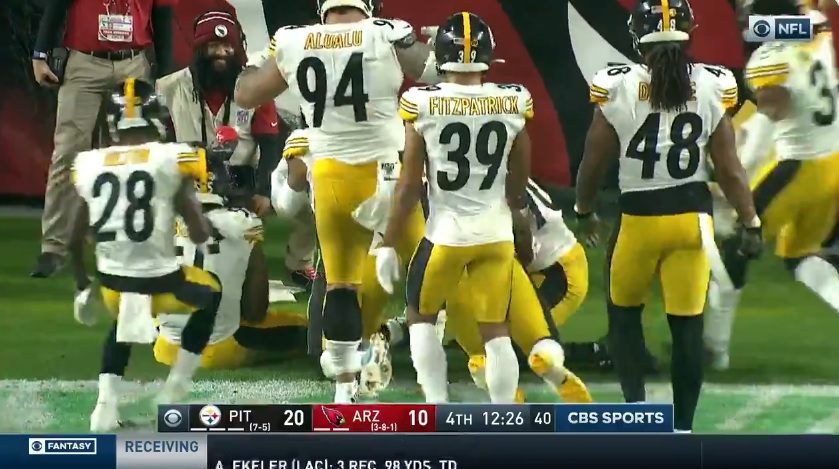 Getting after the quarterback and causing turnovers, if a defense can do both those two, then they are very well off. The Pittsburgh Steelers’ defense this season has been better than just well off, they have been bathing in riches when it comes to applying pressure and causing turnovers.

It was much more of the same last Sunday as the Steelers’ defense recorded five sacks and three takeaways against Kyler Murray and his Arizona Cardinals’ team. While a multi-takeaway game may have seemed impossible to imagine during the takeaway draught that was last season, the Steelers have been taking away the football as they please this season.

Sunday was the third consecutive game in which the defense recorded multiple takeaways and was the 11th time this season that they accomplished such feat. That is best in the NFL by a wide margin.

Most Games With 2+ Takeaways This Season

While the horrors that was the 2018 season may make some believe otherwise, the Steelers have been pretty good at taking the football away since Keith Butler was promoted in 2015. Since Butler became defensive coordinator in 2015, only the Kansas City Chiefs have had more multi-takeaway games than the Steelers.

The next feat that the Steelers could match is the franchise record for most games with at least two takeaways, which is 13 set by the 1978 and 1976 team. It will be intriguing to see if the Steelers can match or perhaps even break the franchise record, though it will not be easy. Both the Buffalo Bills and Baltimore Ravens who are two of their final three opponents have been very cautious with the football this season.

Now when it comes to getting after the quarterback, there are a lot less surprises with the 2019 defense. The bread and butter of Butler’s game is getting pressure and the Steelers have made Sundays a nightmare for opposing quarterbacks since he became defensive coordinator.

Murray felt the Steelers’ wrath as he was sacked five times last Sunday. It was the fifth time this season that Butler’s defense has recorded five or more sacks in a game, only trailing the Patriots who have done it six times.

The Steelers do not trail anyone once the sample size is pushed back to 2015. The Steelers have played 77 games such Butler became defensive coordinator and 20 of those games have seen his defense record five sacks or more. To just grasp how absurd that is, that means that the Steelers have notched five or more sacks in 25.9-percent of their games since Butler took over.

With three more games on the schedule, the Steelers will have three more chances to tie their franchise record of six games with five or more sacks and the stars are lining up for this to happen.

The Bills have allowed five sacks twice in a game this season, the New York Jets have allowed it to happen three times, including a 10-sack performance during week five and the Steelers already sacked Lamar Jackson five times in an earlier matchup.

It seems crazy that the thought of the Steelers’ defense matching or setting franchise records in an era where playing defense has been neutralized heavily but this is not just any ordinary defense. Combined with all the right pieces, Butler and his crew are a special defense that has supplied the offense with all the support it has needed to succeed. The offense’s favorite dish to order this season has been multiple turnovers with a side of five sacks, now hopefully the chefs on defense can continue to provide this dish.