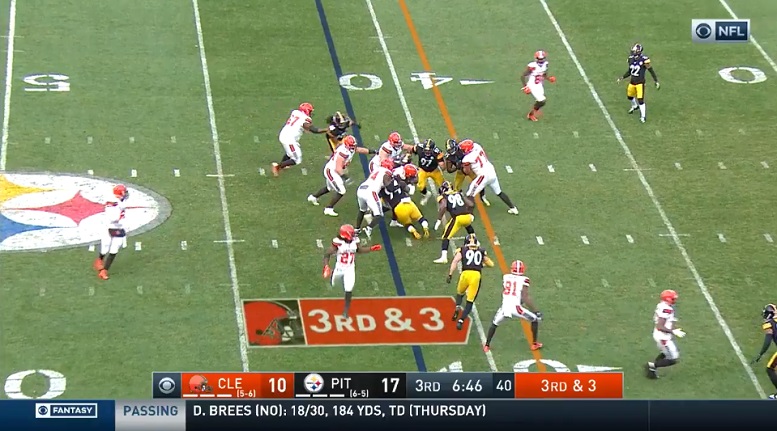 While the Pittsburgh Steelers defense didn’t totally shut down Cleveland Browns running back Nick Chubb during Sunday’s win, the unit did manage to limit him to his lowest total yards from scrimmage output this season. The fact that limiting Chubb on Sunday at Heinz Field was the main defensive goal wasn’t overly surprising, either, as head coach Mike Tomlin indicated as much during his weekly television show Saturday night.

“It’s easy, it’s Nick Chubb,” Tomlin said Saturday night when asked what it is he hoped to limit on Sunday. “You better minimize his impact on the game. That guy, I think, is the second leading rusher in the NFL. I think they’re fifth, collectively, in running the football.”

Chubb carried the football a total of 16 times for 58 yards with a long of 12 yards Sunday against the Steelers defense and eight of those carries can be classified as successful ones. The running back also caught one pass for 21 yards midway through the fourth quarter and that was his last touch of the football in the contest.

Chubb also only carried the football once in the fourth quarter of Sunday’s game and that’s yet another reason why the Steelers were likely able to hold him way below his total yards from scrimmage per game average of 122 yards.

In total, the Steelers defense was able to limit the Browns two running backs to 104 rushing yards on Sunday, which was the exact same amount Chubb and Kareem Hunt had combined in the Week 11 meeting. However, 12 of those 33 combined carries Chubb and Hunt registered in Week 11 came in the fourth quarter with the Browns leading. Sunday, Chubb and Hunt had a combined 89 rushing yards in the first half and just 15 in the second half on six total carries. Tomlin said after the game that was the main goal the team had at halftime on Sunday.

“We felt like we needed to minimize their run in the second half more than we did in the first half,” Tomlin said.