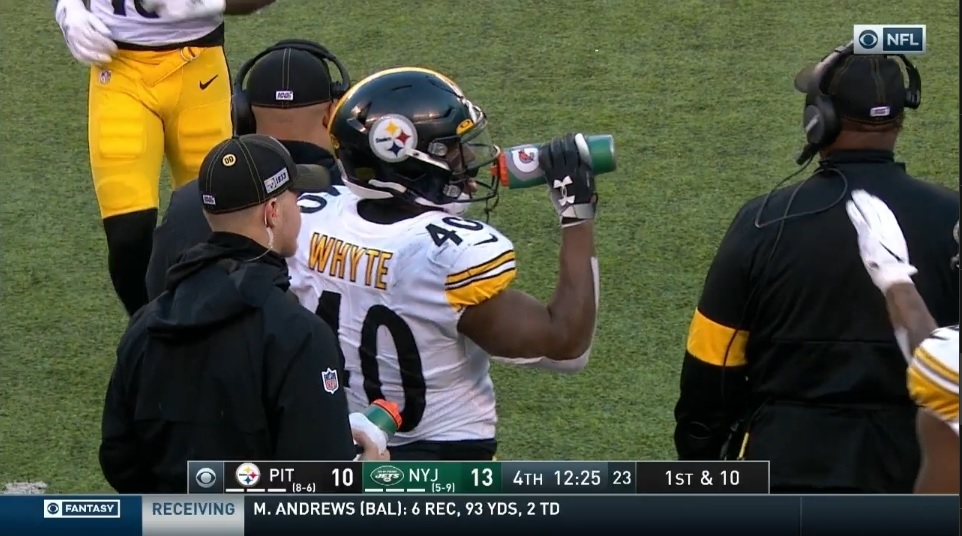 Devin Bush/ILB (1st) – It was a solid game for Bush against the Jets. There weren’t a lot of great plays with his best being a tackle for a loss on a pass to Le’Veon Bell. He wasn’t really a big factor in the running game and for the most part was pretty good in the passing game. Not a lot of talk this year about linebackers on wide receivers even though Bush does it often. At least twice I had him taking away Sam Darnold’s first read. He has done a solid job again the slot receivers this year.

There were a couple of plays in the negative column this week. The big play to Trevon Wesco looked like it was a result of his blown coverage. They were in Man coverage and he started toward Wesco and then broke it off to a WR covered by Mike Hilton. One other play I noticed you can see below.  He was coming on run blitz and instead of staying in his gap he went inside and left a big hole for a 7 yard run.  He needs to stay in the gap to plug it even if there is a blocker there.

Diontae Johnson/WR (3rd) – Johnson was the playmaker this week for the offense hauling in 8 of 9 targets. The only miss was Mason Rudolph first throw that was behind him. Early on they used him in a lot of short area pass routes. He was used often on shallow crossers and curls. He was good versus the Zone defense finding the gaps in between defenders. His touchdown came on a Go route where his only move was a simple head fake to the inside before blowing by the defender and tracking the ball well over his shoulder.

He has really given a boost to the special teams as the punt returner. He’s looking more comfortable and is getting north with the ball. He had a good return called back by a penalty that I didn’t see on my re-watch so I’ll have to check the All-22. A positive day all around for him.

Justin Layne/DB (3rd) – Steady and improving is the best way to describe Layne on special teams.  He’s been okay blocking the gunners. It’s a difficult job and he’s working on it.  As the gunner he’s was consistent winning the one on one battle.

In the clip below he’s at the bottom of the screen and shows a nice jab to the inside and swipe to beat the block and he was in good position at the returner but his foot slipped.

Benny Snell, Jr/RB (4rh) – I don’t understand why but the Steelers staff only wants Snell to run against a loaded box.  On 4 runs the offense was in 13 personnel and the offense had 8 players to block 9 defenders in the box. On 2 runs, they were in 12 personnel with one WR tight to the formation and the offense had 8 blockers for 8 defenders.  Definitely not a recipe for success and that showed with 14 yards on 7 carries. Defenses know there is no threat to throw the ball in this formation.

On special teams he got called for neutral zone infraction which can’t happen even if it is on a confusing penalty call.  He did come close to a blocked punt late in the third quarter.

Isaiah Buggs/DE (6th) – After a week off Buggs got back in the rotation and made a nice play early anchoring against a double team and getting off to trip up the running back. Other than that he wasn’t very effective. He wasn’t able to get off a lot of one on one blocks. He could use some improvement in his use of hands when engaged. He also was late getting off the field resulting in a penalty.

Here is his tackle starting with a good anchor vs the center and left guard holding his ground. He’s able to get off and trip up the RB.

Devlin Hodges/QB (UDFA) – I was encouraged early by the offensive adjustment to a quicker passing game this week. Hodges was getting the ball out quickly and to open receivers.  Then two poor throws downfield got him benched.  The first interception came with a free rusher in his face, he didn’t see the OLB dropping and he threw the ball behind Vance McDonald. His second interception he needs to understand the situation better. It was 3rd and 3 in the red zone and he looked like he stared down Jaylen Samuels when he could have dumped it to Johnson on the shallow cross.

After returning he was okay despite being under a lot of pressure and made a good decision and throw on the deep throw to James Washington. The defender just made a great play.  He will need a major bounce back this week.

Here is the second interception and you’ll see Johnson come from the far side and could have gotten the first down.

Kerrith Whyte/RB (7th CHI) – Much like Snell, the powers that be were consistent in their play calls for Whyte. His first four carries were all Power runs with David DeCastro leading the way, three to the left and one right. I understand this is staple in their running game but this pattern lets the defense know with good probability what play is coming when Whyte is in the game. Those plays resulted in 11 yards. His last 2 runs they changed it up to Zone runs and he had gains of 4 and 7 yards.

As a returner he was solid again getting the ball to the 21, 30 and 26. Not great but better than earlier in the season and I really think he’s close to busting one.  If he does it couldn’t come at a better time.