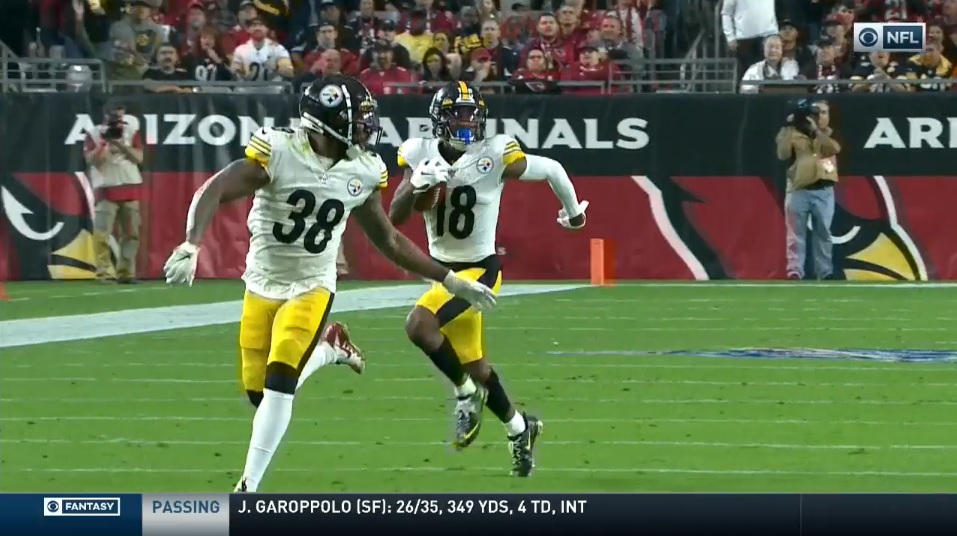 Devin Bush/ILB (1st) – Bush had a quiet game. His quietest of the year in fact getting credited with only two assists on tackles. He struggled to get off the blocks of just about everybody. Offensive lineman pushed him around inside and in space tight ends and even Larry Fitzgerald was able to win a rep versus Bush. Part of the cause was the Cardinals offensive scheme which would use multiple RB’s in the backfield and cross them. Bush would follow his key in one direction but often the run went away from him. One slow game isn’t an issue so hopefully he’ll bounce back next week.

Against the pass, he was able to create a pressure on the second drive to force a throwaway and was solid in coverage though I don’t think he was targeted.

Unfortunately, this was the kind of day Bush (55) had.  He comes up to fill the gap, the runner stays to the inside and Bush gets tossed to the ground by Justin Pugh (67).

Diontae Johnson/WR (3rd) – After a rough game last week Johnson came to play this week and took advantage of his opportunities. It started with the 85 yard punt return that was basically all him.  There weren’t many blocks to see on the film and yet no one was close to him. He looked more comfortable catching the ball on punts which is good to see.

On offense, he made several big plays including reversing field on a WR screen for a big gain which set up his first offensive touchdown since week 8. He had a big conversion late in Q4 working back to the QB on a scramble to convert a first down. He has a 16 yard run on and end around using the blocking of Zach Banner out in front of him. In the two minute drill in Q2 he showed good situational awareness to try to get out of bounds on a shallow cross. Overall, two touchdowns and 163 yards total led to a great turnaround from last week.

Justin Layne/DB (3rd) – Layne saw 8 snaps on special teams and like last week he’s showing improvement both as a gunner and blocking the gunner.  The first punt one resulted in a 2 yard return but Layne had his man completely walled off to the outside. He’s showing creativity as the gunner varying his moves and effectively splitting double teams.

Benny Snell, Jr/RB (4th) – Snell had a below average day overall and seemed a bit feisty in spots. He showed patience running the ball and did a nice job of finishing forward but only mustered 41 yards on 16 carries. He did have an airplane block on the punt return on the only player that might have had a chance at catching Johnson.

The big negative was the fumble at the end of the first quarter. The team had dominated the first quarter and the momentum seemed to turn on that play. It was a great job by the defender putting a helmet on the ball but he has to protect it better. His first run was the first instance of feistiness; he looked like he thought about kicking at the defender after he held his leg too long and later in the game he made a very aggressive chop at a defender that the referee addressed with him.

Here are the feisty plays I mentioned. In the first clip it looks like he thought about kicking and held back. On the second clip he chops at the linebackers hands and at the end you can see the referee come in and almost say “take it down a notch.”

Isaiah Buggs/DL (6th) – Due to the Cardinals up tempo offense there were fewer chances to get Buggs in the game.  He only registered two snaps on defense and didn’t make an impact on either play.

Devlin Hodges/QB (UDFA) – Hodges continued his solid play in leading the team this week. He showed good command of the two minute drill and 4 minute offense and was able to handle several low snaps. His throw to Johnson on the touchdown was placed perfectly on the outside and had some zip on it. On the late Q4 drive he hooked up with Johnson on a 3RD and 13 to keep the drive alive. He made plays with his feet as well running for 34 after escaping the pocket and made good decisions on when to slide or get out of bounds. I liked his decision to not force the throw on the flea flicker as well

He was stripped on a pass attempt that was recovered by Matt Feiler on a play that only had 3 receivers in the route. It was mentioned on the broadcast and I think James Lofton was right.  He needs to anticipate better on the out route and must improve reading the defense. There were times he threw to receivers when there were better options out there.

Here was a play that I thought Hodges (6) could have made a better decision. Though having time, he rushed this one out to Vance McDonald (89). It looks like James Washington (13) was opening up for a first down and he had Johnson (18) underneath with the nearest defender being Terrell Suggs (55).

Kerrith Whyte/RB (7th CHI) – Another positive day on offense for Whyte totaling 50 yards on 6 touches including making a nice adjustment to a high throw on a screen pass.  He had runs of 13, 10 and 9 yards and showed nice burst, good vision and better contact balance bouncing off of would be tacklers for extra yards. The Steelers may have found the smaller, faster scat back they have been looking for for a long time

His kick returns were not a positive this week.  The blocking wasn’t there and he barely got his returns started before being met by tacklers.

Good contact balance on this draw run.  Whyte’s (40) speed gets him by one tacker, he runs through the  arms of another and after seemingly being stopped at the 30 he pushed for 4 more yards.