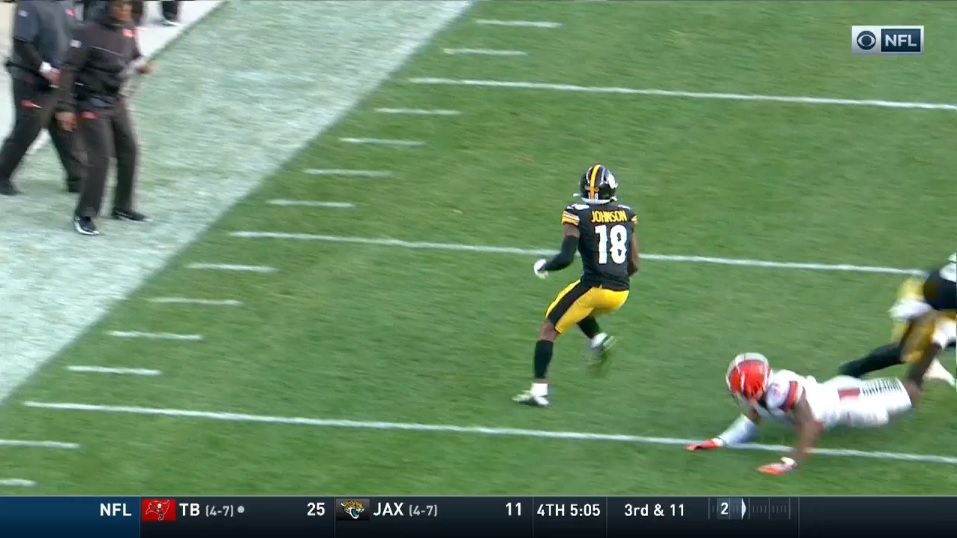 Devin Bush/ILB – Bush had an active day all over the field. He made 7 stops and one tackle for a loss and was often seen covering wide receivers and tight ends.  A handful of time he was also used to blitz but never really got any pressure. On the first drive he made two plays in the red zone to help hold Cleveland to a field goal. On first and 5 he used his hands well to hold of the offensive lineman to the inside and then he knifed inside and with T.J. Watt made a tackle for a loss. On the next play he walled off a slot receiver forcing him to cut off his route and took away what looked to have been Baker Mayfield’s first option.

In coverage he showed some good things including covering two guys on one play but in Q4 there were a couple plays that weren’t good. On one play he looked like he acknowledged some confusion in coverage pointing to his chest and then behind him where he should have been. A couple plays later he was beat by the Browns 6’7” TE Demetrius Harris but Harris couldn’t complete the catch.

Here are the red zone plays.  The tackle for a loss with Watt and then on the second play you’ll see him wall off the defender with Mayfield looking that way

Here the TE on the wing and the slot receiver run basically run the same route and Bush has both covered. Thought that was funny.

Here is the play were there seemed to be confusion in the coverage. He and Watt take the same route and at the end of the clip you’ll see Bush gesturing about where he should have been.

Diontae Johnson/WR – This wasn’t his best game but rookies are going to have bad games. On the positive side his second punt return was a good one showing good stop/start quickness to make defenders miss to get 13 yards. He broke a tackle in the backfield on an end around that was good for 17. His lone reception on 5 targets was a big third down conversion when the Steelers were trying to run out the clock. He also had a DB beat late but the ball was a bit underthrown and the DB was able to recover and knock it away.

The not so positive included running out of bounds on that conversion stopping the clock but luckily it didn’t hurt the team. He also had a false start, an unnecessary roughness call and had a pass go through his hands. It was tipped but it looked like he could have handled it.  He’s shown some body language that seems like he is frustrated a bit. Let’s hope it doesn’t continue.

Maybe it’s just me but here is some of the body language I referred to first on the tipped pass and then on the interception.  He’s seemed to me to be a little frustrated and he can’t give up on the interception like that.  He did hustle to make that tackle but him slowing and giving up on the play for just a couple seconds cost them 28 yards on the return.

Justin Layne/DB – Layne is showing improvement on special teams in each phase. He had a great release on the first punt, never getting touched, that helped force a fair catch. He was better on punt return blocking gunners.  There was one really good rep and another that looked much better than last week. He also made the first hit on a Q4 kick off spinning the runner inside the 15 to let his teammates clean up and finish the tackle. He’s making strides.

Benny Snell Jr. /RB – Snell’s day started off slow getting just 3 touches in the first half but he finished strong including his first NFL TD. With the momentum and the lead he got the bulk of the RB touches in the second half with 14 touches for 59 yards. He showed very good awareness on a DB blitz getting across the formation to get a block.  If Hodges had stepped up to his left it would have been more effective but the awareness is good to see.

Nothing spectacular here but in this situation late in the game this is a big run. He’s first contacted 2 yards past the LOS and gets 5. You do that enough, get those extra yards, it will wear a team down.

Isaiah Buggs/DL – He saw some action earlier than usual in the first half but still received about the same amount of reps. He’s looking good as a stack and shed, 2 gap defender. He’s has the hand usage and strength to stay square and hold off lineman. His issue defending the run is when he needs to move laterally.  He’s not quick at the snap and quicker lineman can get inside of him and beat him to the spot.

Devlin Hodges/QB – Like Snell, Hodges day started off slow. For about a quarter and half it looked like the staff was trying to run a safe offense. It looked like it took one free play to change their minds. His perfect throw over the outside shoulder to James Washington seemed to give them confidence to let Duck sling it. Overall, he did well.  He gave the receivers chances to make plays and they responded. Washington and Tevin Jones were making tough catches.  Vance McDonald and Deon Cain were given the ball early enough where they had a chance to make a play to get first downs and they did. He had a smart scramble in Q3 to convert a first down and made two passes on the late Q4 to move the chains and keep the clock moving. That was big show of trust by the coaching staff. They even ran a QB draw and read option with him something we don’t usually see from Pittsburgh QBs.

There were some bad plays including that read option play. He tried to elude defenders and throw it with his left hand and luckily the fumble went out of bounds.  There was also a throw in Q4 that was too high for Johnson. He had other players more open than where he tried to squeeze it.

Kerrith Whyte/RB – He returned a kickoff past the 40 yard line! When was the last time we got to say that about a Steelers kick returner.  It looked like they actually blocked it pretty well and he showed good burst and broke two tackles. He got 3 carries on the offense gaining 10 yards with a slight uptick in offensive snaps from 7 to 9. He caught a ball in the flat made a tackler miss and fumble but it was all voided by a penalty.  Expect him to get a screen on offense soon. Get him outside in space with some blockers.