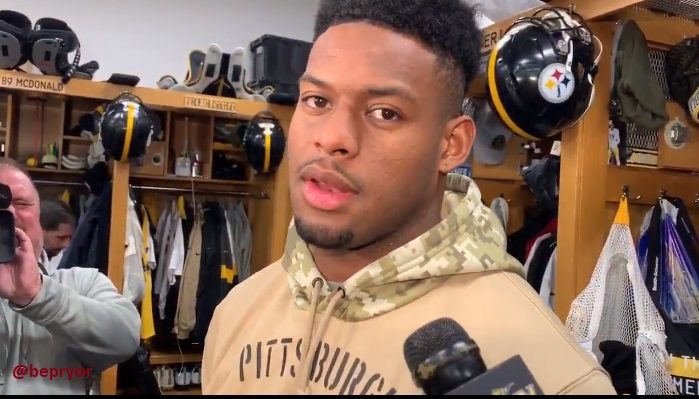 Will the Pittsburgh Steelers get wide receiver JuJu Smith-Schuster back for the team’s Week 16 road game against the New York Jets? It’s too early to tell right now but Smith-Schuster did somewhat update his status Monday morning during an exchange with members of the media.

“We’ll see,” Smith-Schuster said. “All depends on how my knee feels when I go out there and practice.”

JuJu Smith-Schuster on if he’ll play Sunday: “we’ll see. It all depends on how my knee feels when I go out there and practice.”

Added he felt like he could’ve played yesterday, but said he had to take precautions. pic.twitter.com/mJ4ab3dd7r

According to Ray Fittipaldo of the Pittsburgh Post-Gazette, Smith-Schuster indicated Monday morning that he’ll attempt to test the knee in practice again this week. It’s also reported that Smith-Schuster did some work on the field prior to the Steelers Sunday night home game against the Buffalo Bills.

JuJu Smith Schuster just talked to some reporters in the locker room. Sounds like he’ll test the knee in practice again this week. He did some work on the field last night before the game. Says he has to be smart. Doesn’t want to make injury worse.

Smith-Schuster did add on Monday that he has to be smart with his knee because he doesn’t want to make the injury worse than it is now.

Smith-Schuster, who missed his fourth consecutive game Sunday night, was seemingly on track to return against Buffalo at this same time last week. However, after practicing fully this past Wednesday, Smith-Schuster left the team’s practice early on Thursday after aggravating his injury. While the wide receiver claimed on Friday that he didn’t suffer any sort of a setback on Thursday, he did fail to practice on Friday and was ultimately ruled out for the team’s Sunday night game on the injury report.

Smith-Schuster last played in a game in Week 11. He’s registered 38 receptions for 524 yards and three touchdowns this season.