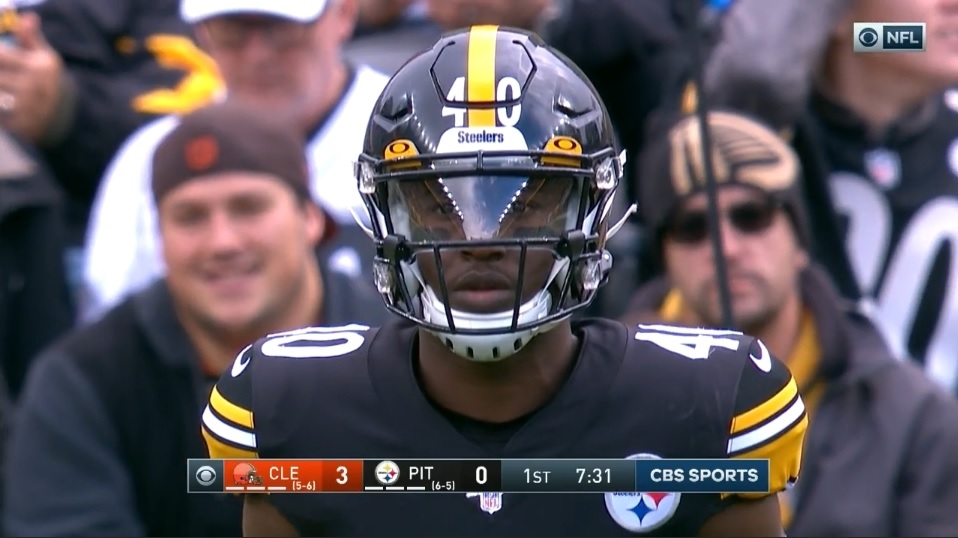 What a win that was.

The Devlin Hodges era remains undefeated through 2 starts as Duck provided a major spark for the Pittsburgh Steelers Sunday, helping the Steelers hold off the Cleveland Browns, 20-13, Sunday afternoon at Heinz Field, keeping the Steelers locked into a playoff spot through 13 weeks.

Two weeks after dropping an ugly game to the Browns in Cleveland, things looks so much better Sunday at home as the run game got rolling once again, while the defense turned up the heat on Baker Mayfield in the second half, helping the defense close out the win in typical fashion this season.

A win feels great, and when it’s over a division rival that spent the last two weeks doing a lot of talking, it feels even better.

Hodges started out slow, drifted to his right and threw off his back foot quite a bit early in the game, but he settled in after that and dialed up the deep ball to James Washington a few times, while also finding Tevin Jones with a dart up the seam late in the first half.

The eye test really showed me that Hodges remains really comfortable in this offense right now. He has the look and the moxie for the position, and he doesn’t lack any type of confidence at this point.

Aside from a couple of great throws, Hodges did have some nerve-racking ones, including an underthrown deep ball into double coverage to Diontae Johnson, and the late interception to Terrance Mitchell that gave the Browns late life.

Overall though, it was refreshing to see a young quarterback cut it loose down the field, giving his playmakers a chance to make a play on the football. That opened up the box and helped the run game get downhill against Cleveland.

The team box score might not look great (3.9 yards per carry), but the Steelers’ run game was very effective and efficient on Sunday, providing a ton of balance and toughness to the Steelers’ offense.

I was really pleased with Benny Snell Jr. once again. He ran with a determination we haven’t seen much of this season. He ran through tackles, pushed the pile forward, and fell forward consistently, wearing down Cleveland’s front 7 in the process.

Jaylen Samuels looked much, much better this week for the Steelers. He had some success once again in the Wildcat, and had some burst as a receiver, moving the chains a few times on Sunday through the air.

Kerrith Whyte Jr. didn’t have quite the impact as a running back on Sunday as the previous week. The Browns knew power and toss power were coming with him in the backfield.

Washington’s impressive breakout continued Sunday. He was the best player on the field, by far. That’s saying something, considering the two receivers on the other side in Cleveland.

Washington made an absurd toe-tap catch along the left sideline on a free play to spark the Steelers, and then made a juggling touchdown catch later on in the game. He averaged nearly 30 yards a catch on Sunday and really opened things up underneath for the Steelers.

Jones continues to show an ability to separate from coverage and get open, and Hodges found him for a huge 28-yard gain late in the first half that helped set up a score for the Steelers. I really like Jones’ upside and hope he continues to get looks.

Johnson was rather quiet again, but his 14-yard catch-and-run on a third and 6 late in the game was clutch for the Steelers. He also added a 17-yard run on a jet sweep, breaking a tackle in the backfield in the process. Johnson did have a personal foul penalty and a false start penalty in the game though, so it wasn’t all positive for the rookie.

Deon Cain is a serious matchup problem for cornerbacks on the outside. He’s a burner and is super physical, and those were on display Sunday on his 5-yard catch, muscling for the first down on the play, before then drawing pass interference in the end zone, setting up Snell’s touchdown.

Usage was better, but not by much on Sunday for the Steelers’ tight ends.

Vance McDonald was basically relegated to the 3- to 5-yard throwing window, finishing with three catches for 21 yards, including a long of 12 yards on third and 15 in the second half. McDonald also had a false start penalty in the win and didn’t really seem to make a big impact as a blocker once again.

Nick Vannett hauled in one pass for 7 yards, but was super quiet Sunday overall.

Two weeks ago the Steelers’ offense line looked like a turnstile against the Browns. On Sunday, it was back to the standard we’ve all come to expect from that unit up front.

Alejandro Villanueva caught a break with no Myles Garrett (his kryptonite), but he was darn good on Sunday, playing with balance and power.

I was really pleased with Ramon Foster and David DeCastro inside, while BJ Finney once again stepped up and gave the Steelers a solid performance in place of Maurkice Pouncey.

Matt Feiler gave up an early sack to Chad Thomas and had a false start penalty, but overall l was really, really pleased with the way this group performed against the Browns’ front 7.

The run game had some room on Sunday to get rolling, and a lot of credit needs to go to the offensive line for opening up holes for Snell, Samuels and Whyte to run through.

Yes, this group turned it on late as Javon Hargrave sacked Mayfield in the second half and Cameron Heyward recovered a fumble, but this unit was gashed in the first half on the ground, helping spot the Browns 10 points.

To be fair, the starting trio of Hargrave, Heyward, and Tyson Alualu combined for 16 tackles, 1.5 sacks and 2 quarterback hits, but a lot of that work came late in the game with the Browns playing catch-up.

My real gripe with this group was the lack of push and punishment against the run early in the game. That’s why the grade is so low.

Much like the defensive line, I had the same feel for the inside linebackers. Where was Devin Bush, Mark Barron, and Vince Williams against the run in the first half? Those were some huge lanes for Nick Chubb and Kareem Hunt to run through early in that game Sunday.

The group helped slow things down on the ground when it mattered most, coming up with some stops in short-yardage situations to help turn the tables in the game. Bush did lead the Steelers in tackles with 7 in the win, while Barron recorded 5 and Williams recorded 2, with Bush and Williams recording tackles for losses.

Outside, TJ Watt and Bud Dupree were phenomenal once again. Dupree recorded 1.5 sacks and forced a key fumble on Mayfield during a sack that Heyward recovered, helping the Steelers take a 10-point lead, while Watt recorded an early sack. Dupree was called for a bogus roughing the passer call late in the game that helped keep a drive alive, but overall the OLB duo was once again stout.

Holding Odell Beckham Jr. to just 3 catches for 29 yards was quite the performance for the Steelers secondary, even if Jarvis Landry went for 6 catches for 79 yards, including a spectacular toe-dragging catch to move the chains.

Steven Nelson did have a rough day early on when tight end Stephen Carlson stiff-armed him to the ground, but overall the cornerback had a strong day, playing a huge part in shutting down Beckham Jr.

Joe Haden clinched the game with a huge diving interception on a terrible throw by Mayfield that was way behind Landry up the seam. However, Haden was up and down on the day, missing a tackle on Hunt’s touchdown catch, as did Cameron Sutton, who wasn’t really heard from outside of the miss.

The Browns went right after Mike Hilton in the slot on Sunday, and for the most part he answered the challenge, breaking up two passes on the day.

At safety, Minkah Fitzpatrick and Terrell Edmunds were mostly quiet, although Edmunds continued his struggles in the tackling department Sunday. Fitzpatrick did have a huge breakup late in the second half, while Edmunds helped break up a touchdown to Demetrius Harris in the end zone, hitting him low, causing him to come down hard to the ground, popping the football out.

That was so refreshing to see, not only because it was blocked up pretty well, but because Whyte Jr. ran through a couple of tackles and helped push the Steelers towards midfield.

Johnson had a really nice punt return as well, stepping through a couple of tackles for the 13-yard punt return, but overall it wasn’t anything spectacular back there after that.

Serious question for the readers: can we start considering Chris Boswell and Jordan Berry a borderline-elite specialists duo at this point in the season? These two are just so consistent and super solid for the Steelers, putting points on the board while flipping the field when needed. It’s really refreshing to see after last year’s debacle.

Kick and punt return units were really solid as well. Kameron Kelly flashed a few times on kick coverage, while Johnny Holton and Justin Layne played really well as gunners. It was good to see the attention to detail and the effort level on special teams Sunday.