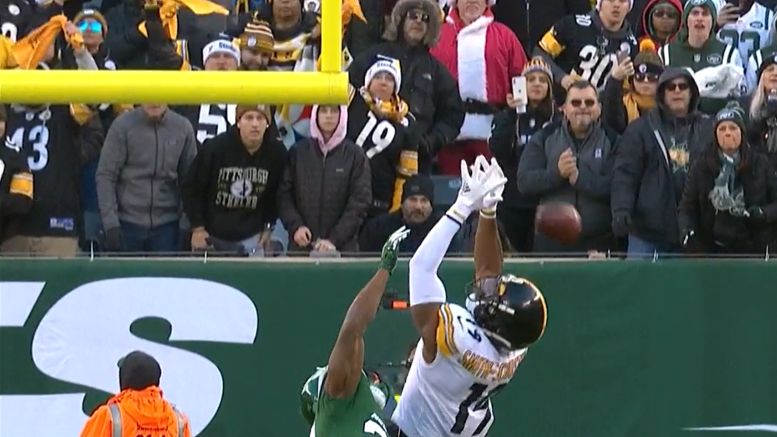 Even though the offense has been lagging, things looked like they might be picking up courtesy of some reinforcements for the Pittsburgh Steelers. They got James Conner back at running back last week, and he made a few significant plays in limited work, no worse for the wear.

He had a couple of plays today, but left in the first half with a quad injury, the severity of which is being evaluated. JuJu Smith-Schuster returned today after missing the past four games, suffering a knee injury in the team’s loss to the Cleveland Browns. For most of the game, he may as well have not been out there.

In all, Smith-Schuster was targeted only four times during the game, making two catches for 22 yards. His two receptions did result in first downs, including a significant 14-yard grab to convert on third down on one drive. But it’s the final target that has stuck with him.

With the Steelers trailing 16-10, facing fourth and six with under a minute to play, backup center B.J. Finney tossed back a bad snap to rookie quarterback Devlin Hodges, who already had been benched earlier in the game, but had to return after Mason Rudolph was injured.

Despite having to bobble the ball, Hodges was still able to get off a generally on-target pass down the field, under the circumstances. It was just over the hands of Smith-Schuster, falling incomplete, essentially ending the game, and the Steelers’ control of their own playoff destiny, at the same time.

Here is the final Devlin Hodges pass that JuJu Smith-Schuster should have caught. You can see why he took it hard after the game. #Steelers pic.twitter.com/UOaywNRj9E

It’s unclear if the ball was too high, if he could have made the catch had he placed his hands differently, but it doesn’t matter to him. He knows in his mind, and in his heart, that he needed to make that play for his rookie quarterback, for his team.

“The game’s on me”, he told reporters from the locker room following the loss. “That’s my fault”. It’s about a year since his fumble at the end of the New Orleans Saints game similarly cost the Steelers the game and their control over their playoff fate.

JuJu Smith-Schuster making clear he should have made the fourth-down catch. ‘The game’s on me,’ he said. ‘That’s my fault.’

In 2018, they went on to win in the season finale, but did not get the help that they needed to reach the postseason. This year’s circumstances for assistance, and for their own game, may be just as difficult, as things look increasingly bleak for a Steelers playoff game this season.

Smith-Schuster was clearly not at 100 percent for this game, or likely even particularly close. He was simply healthy enough to play and get some work in. The entire game certainly is not on him, by any means. But he feels the loss strongly after not coming down with that fourth-down pass to end the game.

JuJu Smith-Schuster takes the blame for the loss pic.twitter.com/xUK75MIble