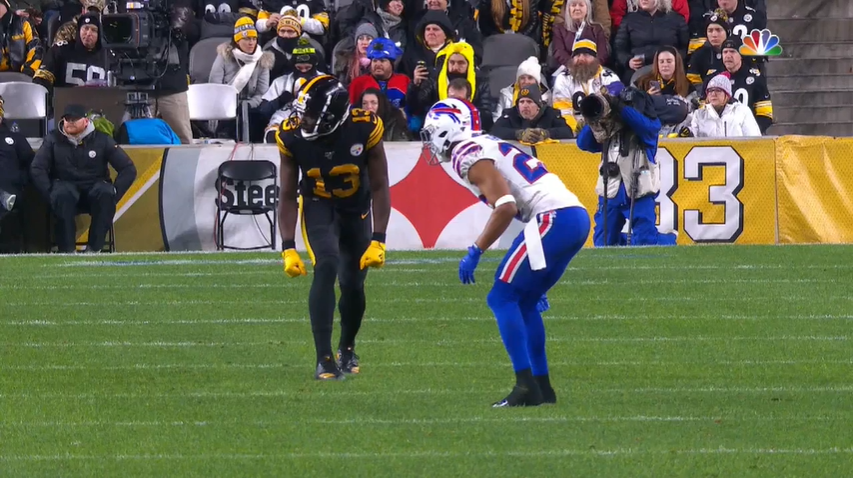 With the Pittsburgh Steelers trailing 7-0 early against a very good defense in the Buffalo Bills, the team needed a spark and they needed one fast. Against one of the best secondaries in the NFL, the Steelers were not going to be able to just carve up the Bills’ secondary at will, they needed to catch them off guard.

James Washington did just that when he and Devlin Hodges connected on a 34-yard pass that would jumpstart the Steelers’ first scoring drive. Washington ran a “Sluggo” route, which is a simply a slant and go route. The double move is meant to take advantage of aggressive defensive backs and can provide a big play if everything goes as planned. The Steelers enjoy using the “sluggo” route in combination with a flat route underneath, thus making the play appear as if it is a simple slant/flat route combo before the receiver cuts upfield from the slant route.

Below is Washington’s sluggo route from Sunday night’s game against the Bills.

The Steelers are in 11 personnel (1 RB, 1 TE) with Nick Vannett lined up outside Alejandro Villanueva. As mentioned earlier, Vannett is going to run to the flat and Washington is going to slant inside to give the appearance of a slant/flat route combo before turning it upfield. Bills’ defensive back Micah Hyde takes the bait and bites on the slant route and is left in no man’s land as Washington heads vertically up field. With no safety over top in that half of the field, the next step is for the second-year receiver to drift outside and Hodges delivers a slightly underthrown ball but Washington is able to come down with the catch.

While the sluggo route is not commonly called upon, it has been an effective play call for the Steelers, even dating back to Todd Haley’s days as offensive coordinator. The Steelers ran it against the Kansas City Chiefs during the 2017 season and it was a very similarly designed play call. There was once again a flat pattern, this time run by Le’Veon Bell and the sluggo route run by Antonio Brown.

The Steelers are once again in 11 personnel, only this time the running back (Bell) is split out wide and the tight end is lined up outside the right tackle. Bell runs the flat and Brown sells the slant route perfectly before cutting upfield. Brown was arguably one of the best route runners in the NFL when he played and his sluggo route is a thing of beauty. With just one deep safety again, there is no chance to defend this route and the Chiefs are lucky that Brown does not take this to the end zone.

When Randy Fichtner took over for Haley, it was reported that the playbook would not change much and here is just another example. While it is not frequently called upon, the Steelers have had a lot of success with the sluggo route by disguising it as a slant/flat route combo before the receiver turns vertically up field for a big play.