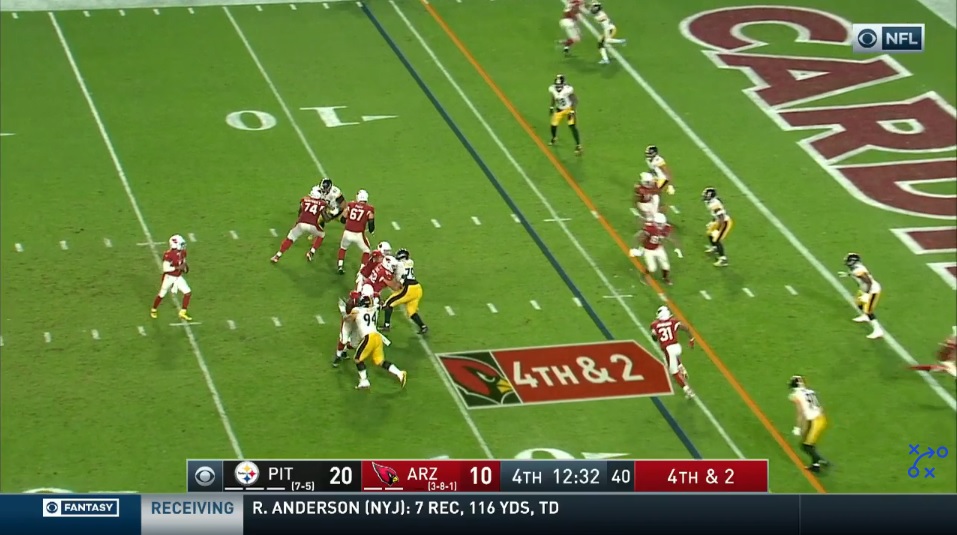 Most fans hate defensive coordinators who drop eight into coverage. Especially when it’s this year’s version of the Pittsburgh Steelers. They have among the league’s fiercest front fours in football. TJ Watt. Bud Dupree. Cam Heyward. Javon Hargrave. 34 sacks between them.

So seeing the Steelers drop eight into coverage, meaning rushing just three, Sunday probably didn’t earn too many cheers from fans. In fact, one-third of their three man rushes came against the Arizona Cardinals, calling it ten times, by far a season high.

Though it wasn’t perfect, it worked brilliantly around the goal line. Pittsburgh called it three times with the Cardinals in goal-to-go situations. The results? An incompletion, one yard scramble, and 4th down interception. Hard to argue with results like those.

Let’s check out what happened on all three plays and why this scheme makes sense near the end zone.

First one came near the end of the first half. Ball on the five. Steelers drop eight, sending only Dupree, Watt, and Heyward. Here’s why it works. It forces the QB to make a tight window throw. Rushing three doesn’t work as well between the 20s because of the vertical space to expand the defense. You can clear out coverage with a couple of vertical concepts and the three man rush affords the QB time to wait him out.

Not in the red zone. There’s no way to expand the defense because the back of the end zone limits space. So the Steelers can clog up each throwing window, playing zone to keep eyes on the QB – rushing three tends to invite the QB moving around or trying to scramble downfield – and making Kyler Murray, a rookie, step up with an NFL caliber throw.

Murray tries to hit Larry Fitzgerald over the middle but he’s off platform and the throw is behind, incomplete. Here’s a still shot of the coverage. Just nothing open. 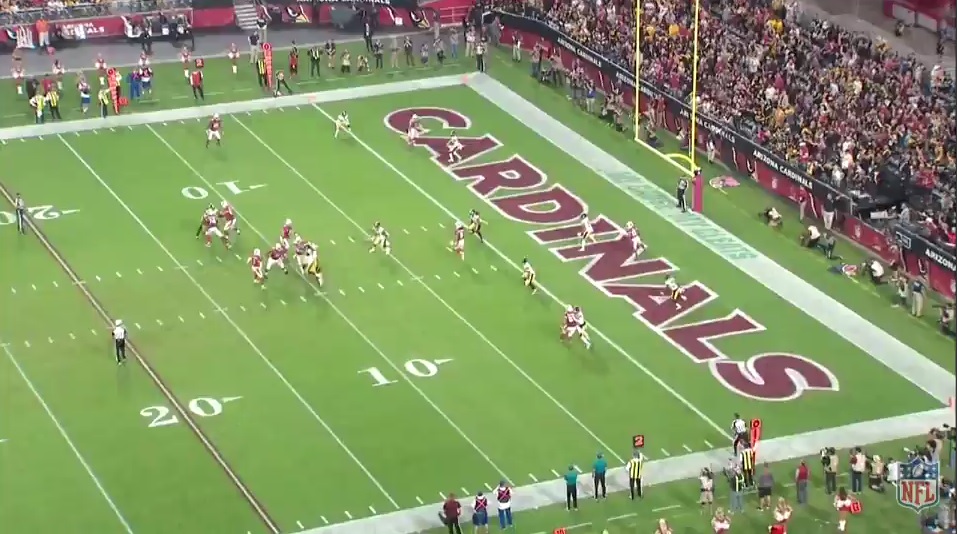 And here’s the whole play.

Next instance. 4th quarter. Same thing. Rush three, drop eight, zone it up. Clog up all of the throwing windows, Steelers have more in coverage (eight) than Arizona can possible have in the route (four eligible here). TJ Watt is still 1v1 and able to create some pressure, so now you’re getting Murray off his spot with just three, which is awesome, and forcing him to roll out.

With zone coverage, eyes are on the QB, making it easier to tighten up windows in a now half-reduced field and to ensure Murray can’t take off. If the Steelers were in man, eyes aren’t on the ball, and if Murray runs, the defense is late to react because their eyes are on the receivers.

It amounts to a one yard gain.

And the Watt INT. Look at it from the end zone view this time. Same principles. Rush three, drop eight, and force Murray into a difficult situation. Their offense is designed to be (relatively) easy. Read option, RPOs, simple triangle reads where everything is done quickly. Dropping eight forces a difficult decision. Which chance does he want to take? That gets him to think and make poor decisions, like throwing the ball directly into Watt’s arms instead of running and – probably – picking up the first down.

Check out the aerial view from this play.

One other bonus play. Our charting technically has this down as a four man rush because Vince Williams ends up coming in for the sack but this is another initial three man rush with a spy. Pittsburgh’s playing their 1-5-5 defense. That helps compensate for the loss of Stephon Tuitt and is a creative way to get all three ILBs on the field. It also lets the defense have a dedicated spy on a mobile QB like Murray.

When you’re dropping eight, you can afford to “give up” someone in coverage to focus on the QB. Still have seven in coverage, still have the numbers advantage. If you’re rushing four and spying with a fifth, now there’s only six behind. So here, Williams gets to key Murray, make sure he stays in the pocket, and once Murray looks to bail, Williams comes charging in to clean it up for the sack.

Pittsburgh will face mobile QBs in two of their next three weeks. Josh Allen this Sunday and Lamar Jackson, or if he’s rested, Robert Griffin III, in the Week 17 finale. Those QBs are more experienced and probably perform better against these looks but I love the idea of dropping eight in the end zone. Hard for offense’s to score if no one is open. Good call here from Keith Butler and Mike Tomlin.