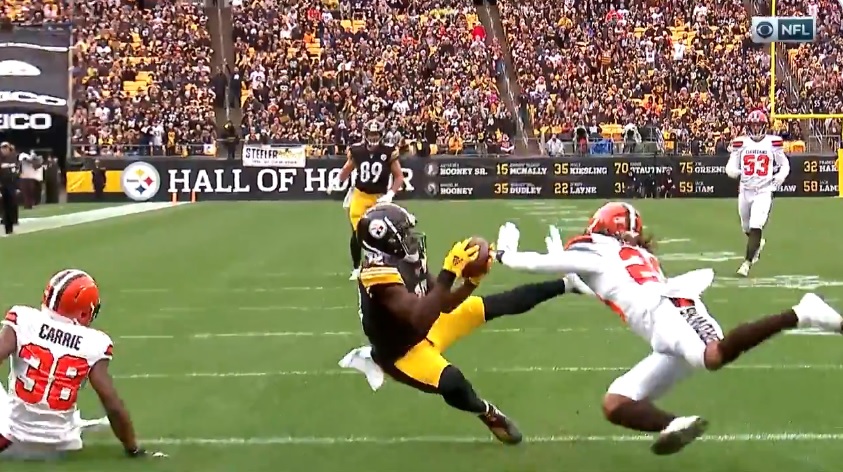 While the Cleveland Browns may have come into this game believing that the Pittsburgh Steelers started the bad blood between these two teams, there would be no doubt who ended it. Sparked by 20-unanswered points by Devlin “Duck” Hodges, the Steelers spread their wings and soared over the Browns by a score of 20-13.

Hodges, making his first start since week six, minimized the errors and made several great throws as he outdueled a former number one overall pick to push the Steelers to 7-5. Hodges finished with over 200 yards passing with one touchdown and interception each.

The Steelers took a bit to find their wings as after two drives, the Browns had 147 yards of offense to the Steelers’ nine and to no one’s surprise, they led 10-0 early. On Cleveland’s first drive, Baker Mayfield twice converted a third down attempt to moved the chains. Both third down completions went to Jarvis Landry, who had an impressive toe tap on a 15-yard completion on third and 14. This would lead to an Austin Seibert field goal and a quick 3-0 lead.

With the Steelers unable to do much, their defense was on the field quite often and they surely felt the fatigue on the Browns’ third drive. Browns running back Nick Chubb chewed up the defense before Kareem Hunt finished it with a 15-yard touchdown reception.

While the Browns jumped out to an early lead, Hodges let the ducks fly and got momentum back on the Steelers’ side in the second quarter. Hodges helped cut into the Browns lead first with a 10-play, 62-yard drive that saw him connect with James Washington on a 31-yard catch down the left sideline. That would lead to a Chris Boswell field goal as the Browns still led 10-3.

Washington was not done putting points on the board for his offense yet, as on the ensuing drive, he reeled in an impressive 30-yard touchdown pass despite being interfered with heavily. The second-year receiver was able to wrestle off two Browns’ defensive backs and haul in Hodges’ throw to tie this game at 10 and give the Steelers the boost they needed before halftime.

As if it was not impressive enough, Hodges and Washington continued to let it fly as the duo hooked up again for a 44-yard grab to open up the second half. This would also mark the first 100-yard receiving game of Washington’s career and Benny Snell would finish the drive with a first of his own as he scored his first touchdown of his career to put the Steelers ahead 17-10.

The biggest storyline coming into the second half was Mayfield’s status. He was seen holding his right hand after batting it on the helmet of Bud Dupree. While he would exit briefly, he returned to play after halftime though he would be unable to escape Dupree once again. The Steelers’ outside linebacker stripped Mayfield towards the end of the third quarter with Cameron Heyward recovering. The Steelers would capitalize off this and make it a two-score game with another Boswell field goal.

Mayfield looked to rally late in the fourth but another sack, this one split by Heyward and Dupree would force the Browns to settle for another field goal. The Steelers pass rush caused fits for the Browns’ quarterback all afternoon as after a Hodges interception, Javon Hargrave was able to keep the Browns off the scoreboard sacking Mayfield, knocking them out of field goal range in the process.

The Browns had one more chance to tie it late but veteran cornerback Joe Haden had a fitting dish of revenge ready to serve to his former team. With just over a minute left, Haden intercepted a Mayfield pass that would seal the Steelers’ victory.

The Steelers will now travel to the dessert and take on the Arizona Cardinals next Sunday. Kickoff is set for 4:25 p.m. EST.