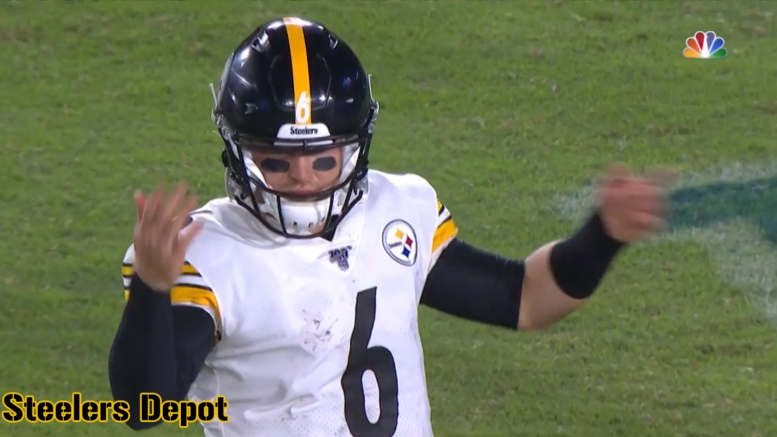 Not surprisingly, Pittsburgh Steelers head coach Mike Tomlin said on Tuesday during his weekly press conference that rookie quarterback Devlin Hodges will remain the team’s starter on Sunday against the Arizona Cardinals.

“Duck will be our quarterback again this week,” Tomlin said Tuesday. “He’s performed well in hostile environments, but he just doesn’t have a big sample size. I like what I saw in L.A. I liked what I saw in the second half in Cincinnati, but he’ll be moving now into his roughly seventh quarter of a road work. We respect it. We got to prepare that way in preparation for our offensive unit.”

With the Steelers once again playing on the road this coming weekend with Hodges as their quarterback, Tomlin was asked on Tuesday to detail what kind of challenges the team faces when playing outside of Pittsburgh with a very young quarterback.

“You know, just some of the things, the communication issues associated with environments,” Tomlin said. “You know, it’s tough for a veteran quarterback in hostile environments to execute the necessary communication in the allotted time with people and so forth to just handle the things that need to go on prior to the snapping of the football. It gets doubly challenging when you lack experience in that area. So it’s really a natural challenge, one that you overcome by living and playing. And so we acknowledge that it’s an issue. We’ll work our tails off to prepare him in every way that we can for it and he’ll do that. But ultimately he’ll get better just by doing.”

This past Sunday against the Cleveland Browns, Hodges completed 14 of his 21 total pass attempts for 212 yards with a touchdown and an interception in the team’s 20-13 win. That performance included him completing four of his six deep pass attempts of 20 yards or longer down the field for 133 yards. One of those deep throws was his lone touchdown to wide receiver James Washington.
‘
With Hodges now the presumed starter moving forward through the final quarter of the regular season, Tomlin wad asked on Tuesday if the rookie quarterback is getting more attention now to get him to progress to the next level in his development.

“We give him the attention that a starter appropriately deserves, but we’re not giving him any additional attention,” Tomlin said Tuesday. “I had this conversation with someone after the game. I’m thoughtful about my interactions with people. We always say the right things, but do our actions match our words? I told Duck I had a lot of confidence in his abilities and his preparation and his talents and I wanted to display that confidence by not talking him to death. Not having a bunch of additional meetings and things of that nature.

While Hodges has played extremely well this season in his limited time, he’s still had an occasional hiccup and specifically when it comes to late-game situations and him needing to do a better job of knowing when ti throw the football away or when to take a sack. Tomlin was asked to define the areas that he thinks Hodges needs to improve in on Tuesday.

“Man, there’s so many areas that we need to work with Devlin on; pick it,” Tomlin said. “But specifically those moments you mentioned, certainly, because they’re weighted differently, they’re heavy. It’s when you got to start taking calculated risks oftentimes in pursuit of victory. And so there is going to be some risks maybe associated with some of those moments and how do you balance that? It’s just things that he’s going to learn and we’re going to learn in terms of managing him along the way. And hopefully we don’t get any negativity in the process.”

Hodges will be looking to notch his third consecutive win as a starter on Sunday against the Cardinals. With his win Sunday against the Browns, he’s now just the second rookie undrafted quarterback to win his first two starts in the common draft era (since 1967) with the other one being Ed Rubbert in 1987 when he played as replacement player for the Washington Redskins. Rubbert also won his third start and then was never heard from again after the strike ended.

For the season, Hodges has completed 41 of his 61 total pass attempts for 530 yards with three touchdowns and two interceptions.