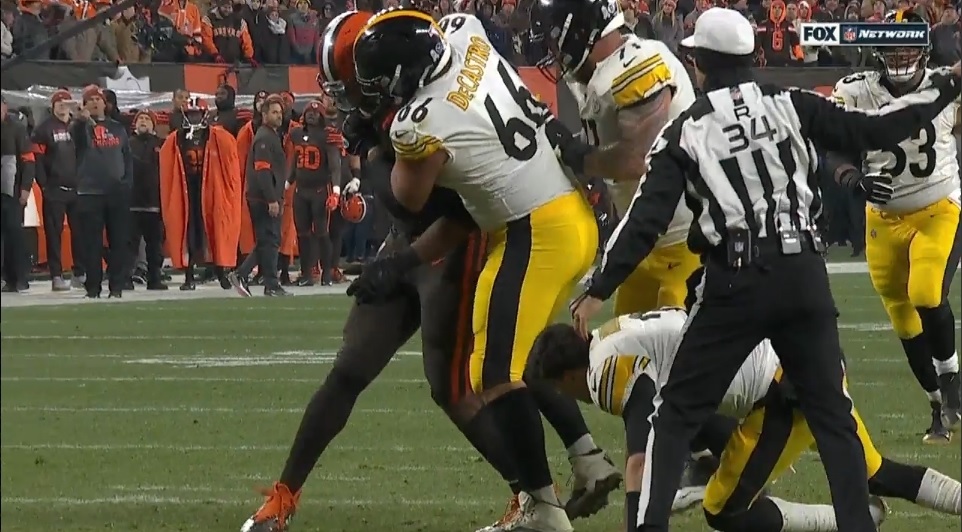 This game was gruesome, ugly and at times disturbing and I’m not just talking about the Pittsburgh Steelers offense. A brutal and inexcusable brawl will be all anyone talks about after this one as the Steelers suffered an insurmountable number of bugaboos and bruising as they were defeated by the Cleveland Browns by a score of 21-7.

Even with the game in its final seconds and the score all but decided, the Browns and Steelers got into what looked like a Royal Rumble as the Steelers’ offense and Browns’ defense got into one of most violent beatdowns you will ever see. Mason Rudolph had his helmet ripped off by Myles Garrett which he later used to swing at the Steelers quarterback. Rallying for his quarterback, Maurkice Pouncey delivered punches and kicks to the Browns’ defensive end. Both Garrett and Pouncey were ejected and suspensions will likely follow.

Rudolph was not the only Steeler who was struck in the head tonight as many of the Steelers’ skill players spent more time in the locker room or medical tent than on the field. JuJu Smith-Schuster and Diontae Johnson were both ruled out after suffering concussions on helmet to helmet hits while James Conner also re aggravated his shoulder injury.

Couple in the bruising with the bugaboos and this Steelers offense had perhaps their worst showing of the season as Rudolph also had the worst start of his very young career as he completed just 23/44 passes with one touchdown and four interceptions. Rudolph looked very shaky as he missed receivers and made many questionable decisions.

Two of Rudolph’s four interceptions went to Joe Schobert and the final one was essentially the nail in the coffin as it allowed the Browns to go up two scores with just minutes remaining.

The mental mistakes started from the Browns’ very first drive as Baker Mayfield found Odell Beckham for a 43-yard pass to take the Browns to the one-yard line. Steven Nelson was in coverage on Beckham and looked like he was expecting help over the top. Unfortunately, he did not get any and just one play later, Mayfield punched it himself to give the Browns a 7-0 lead.

After being gifted 33-yards on a defensive pass interference call, the Steelers looked to be in business for at least a field goal but a bad hold by Jordan Berry led to Chris Boswell shanking this one wide left.

Mayfield was able to continue taking advantage of this stout Steelers’ secondary not just with his arm but also with his legs. Numerous times it seemed that the Steelers had him dead in his tracks, only for Mayfield to escape and buy enough time to make a play. He did just this as he was able to find KhaDarel Hodges for 41-yard pass after a pump fake bought him the few seconds he needed to get off the big pass. A few plays later and Mayfield would buy time once again, this time chucking it up in the end zone with Joe Haden getting called for pass interference.

The Steelers’ defense would culminate this mistake filled drive with a busted coverage left Jarvis Landry wide open for a 1-yard touchdown catch.

The Browns would commit a few bugaboos of their own and they would directly lead to the Steelers scoring their first touchdown of the night. Rudolph drove 87-yards down the field, though 58 of those total yards came in the form of penalty yardage, as he found Jaylen Samuels for a 3-yard touchdown pass. The drive would not come without casualties as Johnson was knocked out of the game with a concussion after he was delivered a head shot by Damarious Randall. As a result of the hit, Randall was ejected.

Just when it seemed like the Steelers had new life, the team squandered every chance it got. Rudolph was intercepted three times in the second half and was also responsible for a turnover on downs. On a fourth and short, the second-year quarterback failed to pick up on an open receiver over the middle and his pass flew incomplete.

Mayfield would capitalize off of Rudolph’s mistakes and found Stephen Carlson in the back of the endzone to make this a 21-7 game. Mayfield himself did not have an earth-shattering performance but he did not make any mistakes. The Steelers defense was unable to force a turnover in this one and they surely could have used one.

Without a turnover, the Steelers team lacked any sort of fire and their offensive shortcomings finally caught up to them as they fall back to .500. The Steelers will now have ten days to regroup, rebound and ultimately recover before they have to take on the Cincinnati Bengals on November 24th. Kickoff is set for 1:00 p.m. EST.