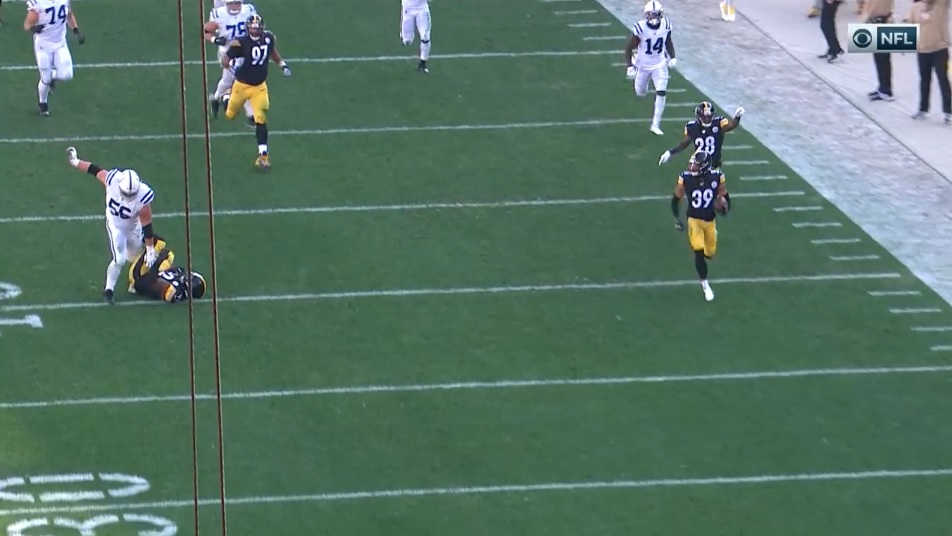 1. Concentrate is the Key to Success – We’ve been waiting for it and maybe the time has finally come. James Washington made a tough catch showing great concentration to pull in a bobbled ball on a comeback route.  Then he made a one handed catch behind hm.  Followed that with at contested catch on a third down play and deep ball in the fourth quarter.  He totaled 69 yards on his receptions which are good numbers. These plays can do wonders for his confidence. Let’s hope he can carry it forward.

2. Big Play Bud – Truth be told I have bad mouthed Bud Dupree as much as anyone. Who knew that it took a contract year to get the best out of him? Credit where credit is due he has made big plays all year. Today he chased down the QB in the red zone on a second down, forced Parris Campbell deep on a Jet sweep that had the look of a big gainer and made a big stop on the final drive.  Add in 2 sacks, 3 QB hits, a forced fumble and fumble recovery and you have another productive game.

3. Can’t get Right – Can’t wait to see the passing chart from Mason Rudolph but in the first half it seemed to tilt very heavily to the left side. Maybe that is by design to make things easier for him to read the defense by concentrating on one side of the field. The deep shot to JuJu Smith-Schuster was down the left sideline. The interception was to the left.  Two of the throws to Washington were to the left. Cutting the field in half makes it easier for the defense hopefully it was just an anomaly.

4. WTF – What are you Thinking Fictner – His play calling in critical situations is, to put it plainly, awful. To me, it seemed, after he saw the tipped ball interception by Rudolph he threw away 90% of the play sheet and oversimplified the offense. He seems to be scared to make a mistake and this timid approach to play calling may be at the direction of the head coach. Inside the red zone and in short yardage was hard to watch. That shovel pass, get rid of it, It hasn’t worked all year. Radical idea let Ben call the plays. I’m willing to give him a shot.

5. Cammy the Bull – My goodness is Cam Heyward a strong man. First he drove Quenton Nelson so far deep into the backfield he stepped on the quarterback’s ankle. Later, on Dupree’s sack fumble he did it to another offensive lineman taking away the opportunity for the QB to step up in the pocket aiding Dupree. He also tipped a pass late in Q4 on third down. He is such a force on the defensive line, so fun to watch.

6. RB Part 1 – With James Conner and Benny Snell out this week the Steelers turned to Jaylen Samuels to lead the way and Samuels did what he does best, catch the ball. Twelve receptions for 73 yards that helped the offense when Randy Fictner turtled on his play calling. He did have a Q4 fumble that seems to be a curse on the Steelers RB’s. Also, some Steelers fans try to make the argument that he is better than Conner and should be starting. Some fans claim he is more explosive.  Stop, he is neither. One good rushing game and a 3.8 yard per carry average in his career is not explosive. Enjoy Samuels for what he is a solid player who has good hands.  It is okay to like Conner and Samuels; you don’t need to choose one or the other.

7. RB Part 2 – After spending time on the practice squad earlier in the year Trey Edmunds is making the most of his opportunities. He had a big block on the onside kick a couple weeks ago and has been making tackles on special teams including one today that led to a forced fumble. Today he got a chance to run the ball and handled it well starting with a 45 yard run and finishing with 73 yards. Kudos to him for waiting and working for a chance and then capitalizing when it came.

8. Minka – That’s it. That’s all I have to say is his name and it brings up happy thoughts, right? Some thought giving up the first round pick was too much especially with the timing of the trade with the Steelers 0-2 and with a backup QB. He has made a HUGE difference to this team. He has 30 tackles, 4 interceptions, 2 forced fumbles and fumble recovery in his 6 games. Today’s 96 yard interception for a touchdown was critical. He continues to make big plays and changes what the defense can do schematically.

9. PI, PU – This is an easy one. Unless it looks like the play in the 2018 NFC Championship game, do not challenge it. I feel the NFL heard so much push back on this from everyone that they told the referees, don’t reverse anything. This rule will go away at the end of the season and we can all pretend like it never happened. Mike Tomlin challenged it twice and neither of them was egregious. He wasted time outs and almost cost them the game.

10. You Have One Job – Kickoff return hasn’t been good this year we all know that. I can’t remember when it really was good. Ryan Switzer is what he is. He’s not explosive but he is smart with the ball the coaching staff trusts him. I don’t expect a lot when he is forced to return the ball on short kicks but I do expect at least some of his teammates to block for him. Imagine looking up and catching the kickoff, you sprint out to about the 15 yard line and there are 5 opponents in front of you with 5 of your teammates behind them with a “my bad” look on their face. Opponents will continue to kick it short unless the blocking improves.