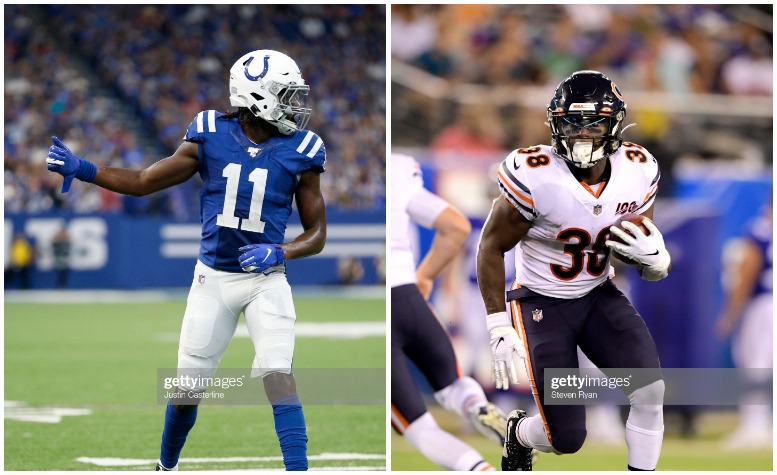 The Pittsburgh Steelers made two transactions on Saturday that included them signing two young and inexperienced offensive skill position players off the practice squads of other teams in wide receiver Deon Cain and running back Kerrith Whyte Jr. Those signings were made mainly because of injuries the team suffered at the wide receiver and running back positions Thursday night. That said, Steelers head coach Mike Tomlin made it clear on Tuesday that the team had interest in both players prior to signing them to the 53-man roster on Saturday.

“I have no idea as I stand here right now,” Tomlin said Tuesday when asked how quickly he thinks Cain and Whyte might be able to make impacts for the Steelers. “How quickly they learn, the level of detail in their play and their talent level will all be the elements of that evaluation process. We liked those two guys; we liked their talent and that’s why they’re here. But being with them day-to-day, instructing them, seeing how quickly they can learn and get on the moving train and add the type of execution and play speed and detail will be the determining factor in terms of their roles.”

Ahead of the Steelers signing Cain and Whyte, a large selection of the Steelers fan base was clamoring for the team to sign veteran street agents such as wide receivers Dez Bryant and Terrelle Pryor and running back Jay Ajayi, just to name a few. On Tuesday, Tomlin was asked to disclose what the upside is to bringing in younger guys who were on practice squads such as Cain and Whyte as opposed to maybe veterans who have been on the street for the entire regular season.

“You know, most of the veterans that are getting off the couch lack a certain readiness from a physical standpoint,” Tomlin said. “Guys that have been on practice squads and working every day have the conditioning and readiness associated with working every day. And so that’s always an element of the discussion. But we also like the upside and we like to coach and instruct and teach and we don’t hide from that. You know, we are always excited about getting somebody with some talent that lacks some experience because it challenges us as coaches and that’s something that we covet as well.”

Cain, who was originally selected in the sixth-round of the 2018 NFL Draft by the Indianapolis Colts out of Clemson, is very likely to dress and play on Sunday against the Cincinnati Bengals with starting wide receivers JuJu Smith-Schuster and Diontae Johnson both currently dealing with concussions that have them both very questionable for the team’s Week 12 road game. Even so, Tomlin still doesn’t know how much the young wide receiver will be able to grasp in a short amount of time.

“Deon Cain’s in the building right now working so we’ll get a sense of that as we push through the week,” Tomlin said.

As for Whyte, who was selected by the Chicago Bears in the seventh round of the 2019 NFL Draft outs of Florida Atlantic, Tomlin really didn’t have much to say about him on Tuesday outside of saying that he can return both punts and kickoffs if called upon to do so. That might just happen Sunday against the Bengals with wide receiver Ryan Switzer now on Reserve/Injured and Johnson currently dealing with a concussion and thus has him questionable for the team’s Week 12 road game.

“We’ll let availability be the determining factor on who’s back there on punys and kicks,” Tomlin said Tuesday when asked if Johnson would be used on returns if he’s ultimately able to play on Sunday against the Bengals.

While Whyte might dress and be a returner on Sunday, it’s probably unlikely that he gets any snaps at the running back position this early and especially if rookie running back Benny Snell Jr. returns from his knee injury this week. While the Steelers will likely be without starting running James Conner on Sunday against the Bengals due to him aggravating his shoulder injury Thursday night, the team still has running backs Jaylen Samuels, Trey Edmunds and possibly Snell to carry the running game load Sunday in Cincinnati.