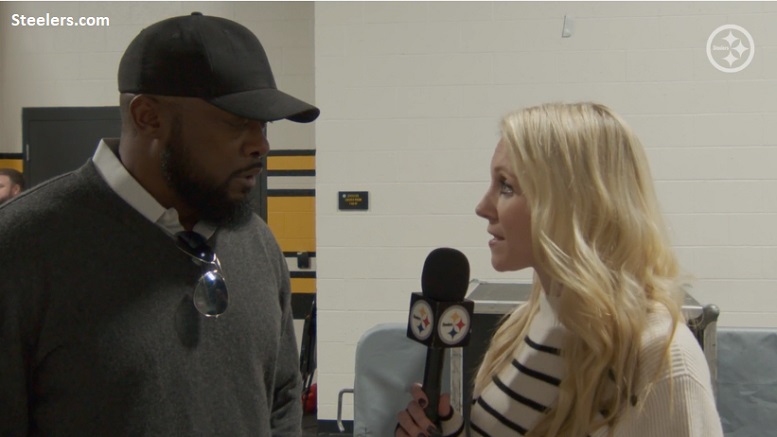 It’s official, the Pittsburgh Steelers will have a much different starting offensive line combination on Sunday against the Los Angeles Rams as head coach Mike Tomlin confirmed what’s been expected to happen most of the week.

“They present different challenges to us so we’re looking at a different formula today,” Tomlin told Missi Matthews on Sunday about the challenges the Rams front seven presents the Steelers offensive line on Sunday. “We’re going to play Chuks [Chukwuma Okorafor] at right tackle, were going to move [Matt] Feiler in to left guard and hopefully that mix is the appropriate one to quell their rush.”

In short, the Steelers Sunday starting offensive line from left to right is now expected to be Alejandro Villanueva, Matt Feiler, Maurkice Pouncey, David DeCastro and Chukwuma Okorafor. The Steelers usual starting left guard, Ramon Foster, is one of the team’s seven inactive players on Sunday due to a concussion he suffered a few weeks ago,

This will mark the first career start for Feiler at left guard. Feiler played seven snaps at left guard at the bend of a blowout win over the Houston Texans late in the 2017 regular season. He has, however, also played some left guard in preseason games over the years. This season, Feiler has started every game for the Steelers at right tackle.

As for Okorafor, Sunday will mark his second career start at right tackle. His last start came during his rookie 2018 season against the Denver Broncos and in that game he gave up a sack and four quarterback hurries. Okorafor has been inactive for a few games earlier this season after losing the backup swing tackle job to Zach Banner.

It will be interesting to see how Sunday’s offensive line shakeup turns out for the Steelers and especially being as Rams defensive tackle Aaron Donald lines up all over the place in the Rams front seven.