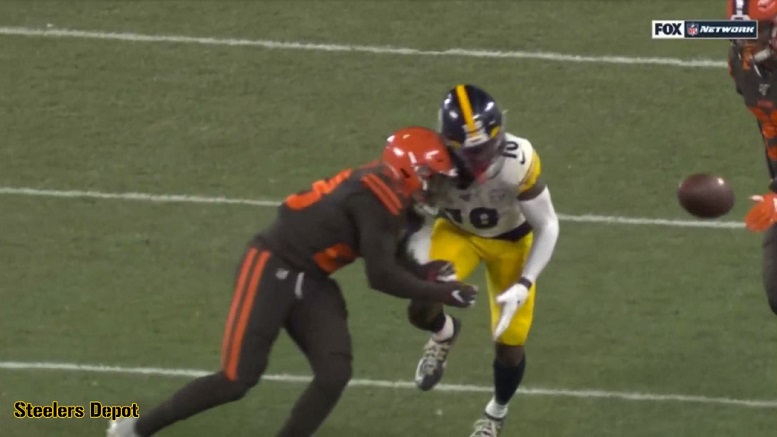 In addition to the long list of fines and suspensions handed out by the NFL this week as a result of the melee that took place late in the Week 11 Thursday night game between the Pittsburgh Steelers and Cleveland Browns, three other players for the home were also finned for illegal actions earlier in that contest

Browns defensive end Chad Thomas was fined $21,056 for a roughing the passer penalty on Steelers quarterback Mason Rudolph with 9:14 left in the first half. From the same play, Browns cornerback Greedy Williams was fined $28,075 for unnecessary roughness on a high hit on Steelers wide receiver JuJu Smith-Schuster that resulted in the offensive player suffering a concussion.

Browns safety Damarious Randall was also fined $28,075 for unnecessary roughness stemming from his helmet-to-helmet hit on Steelers receiver Diontae Johnson early in the third quarter. That hit resulted in Johnson suffering a concussion. Randall was ejected from the game following that legal hit on Johnson.

Due to all that happened Thursday night and how the game ended with the melee, Browns defensive coordinator Steve Wilks was asked to defend the notion this past week that his unit’s performance against the Steelers was dirty and looked Bountygate game-like.

“I would say this right here. This is a physical football team, physical game as a whole. That is not my personality, all right?” Wilks said Thursday during his weekly media session. “That is not our personality as an organization.

“Things happen on the football field, very unfortunate, and I don’t think anything was malicious at all with the hit with Damarious. It just so happened he caught him in the wrong place. So again, it’s nothing that we coach, nor do we condone that.”

Wilks also specifically addressed the hit by Williams on Smith-Schuster on Thursday.

“Live speed, again, I think it was just a bang-bang type of situation,” Wilks said of that hit. “Again, I want to make it clear, it’s nothing that we coach or teach. It was a very unfortunate type of situation again that happened.

“Split-second could he have turned his body either way, maybe I don’t know. But again, this is a very physical game. Things like that happen at times, but believe me, it’s nothing that we’re trying to teach.”

All three Browns players that were fined will likely appeal, if they haven’t already. All three should also be able to play in the Week 13 rematch between the Steelers and Browns in Pittsburgh and that contest is setting up to be a very physical one.