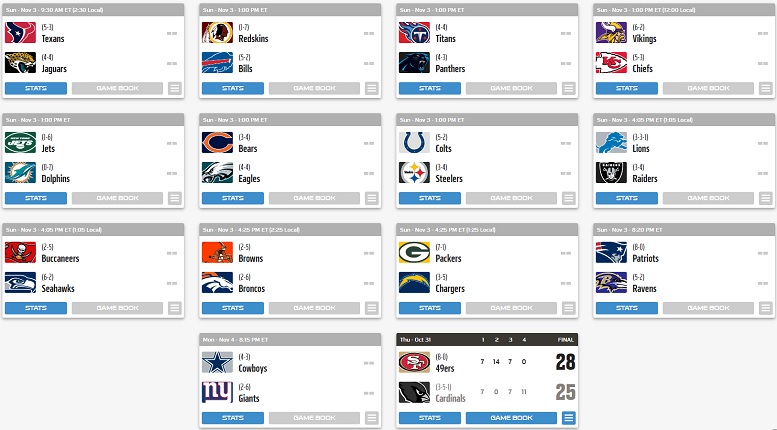 The Pittsburgh Steelers can get back to .500 Sunday afternoon should they beat the Indianapolis Colts at home and that would be a monumental achievement based on how the regular season started. There are also a few other Week 9 games to pay close attention to on Sunday if you’re into doing some mid-season scoreboard watching. The Steelers enter Week 9 as the No. 9 seed in the AFC and below is your rooting guide for Sunday’s games.

Let’s go ahead and get the big one out of the way in a hurry. The Steelers really need the Patriots to beat the Ravens Sunday night. Face it, the Steelers have no shot at catching the Patriots so fans might as well cheer on Tom Brady and company Sunday night against the 5-2 Ravens. A Baltimore loss Sunday night combined with a Steelers Sunday afternoon win over the Colts will have Pittsburgh back in contention for the AFC North with half a season remaining.

The Bills enter Sunday as the fifth seed in the AFC and thus the Steelers can still catch them for a Wild Card spot if the need arises. The Bills lost last week to the Philadelphia Eagles and get a one-win team in the Redskins at home on Sunday. Sure, the Bills are favored to win, but the Redskins might surprise them just the same. Pulling for the Redskins in this game won’t hurt a thing.

The Titans enter Week 9 as the No. 8 seed in the AFC and one spot ahead of the Steelers. Sunday, they have a tough road game against the Panthers so pull for Carolina in this game as a Steelers win coupled with a Tins loss would result in Pittsburgh jumping up at least one spot in the seeding.

The Chiefs aren’t likely to get quarterback Patrick Mahomes back on Sunday for their home game against the Vikings. With this being an NFC team versus an AFC team. might has well pull for the former as the Chiefs can afford to take a loss. Perhaps a loss by the Chiefs on Sunday will make a difference later in the season if the Steelers can string together multiple wins.

Another NFC team versus AFC team on Sunday includes the Lions playing the Raiders in Oakland and obviously yinz should be pulling for the visiting team in this one. The Raiders enter Sunday the No. 10 seed in the AFC and one spot behind the Steelers. A Sunday loss by the Raiders would drop them to 3-5 on the season and make it very tough for them to get back into the Wild Card race.

The Broncos are already pretty much out of contention entering Sunday as they are just 2-6. The Browns enter Sunday 2-5 and thus a loss to Denver would pretty much mean they would need a miracle to make the playoffs as well. The Browns are the better team on paper, but just maybe the Broncos can pull off an improbable home upset just the same. It would be quite hilarious to see the Browns drop yet another game behind the Steelers this weekend.

Hey, yet another NFC team versus an AFC team on Sunday. The Chargers are on life support entering Sunday and a home loss to the Chargers should pretty much do them in for the season. At the very least, a loss by the chargers to the Packers would put Los Angeles too far behind the Steelers to matter. The Steelers beat the Chargers a few weeks ago so at least they own that tiebreaker. Pull for the Packers in this game.

Hey, England deserves to see a game end in a tie at Wembley Stadium on Sunday. These two teams are sixth and seventh seeds, respectively in the AFC entering Sunday so a tie would be the best possible outcome. Regardless, if the game doesn’t end in a tie, at least one of these two teams will have lost. Pull for whichever one you deem the lesser threat to the Steelers in the long run. 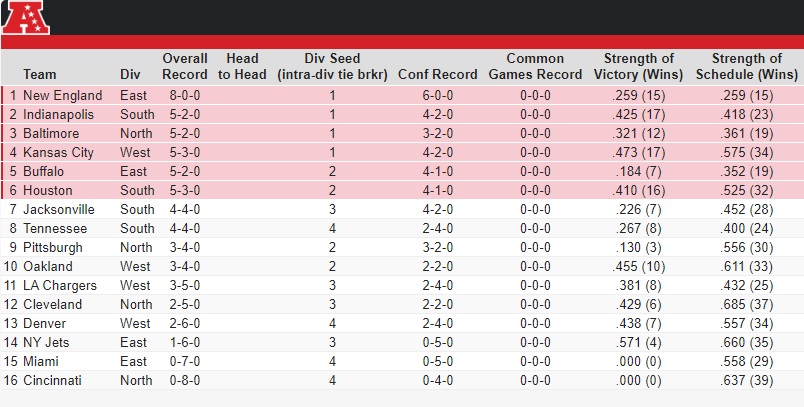