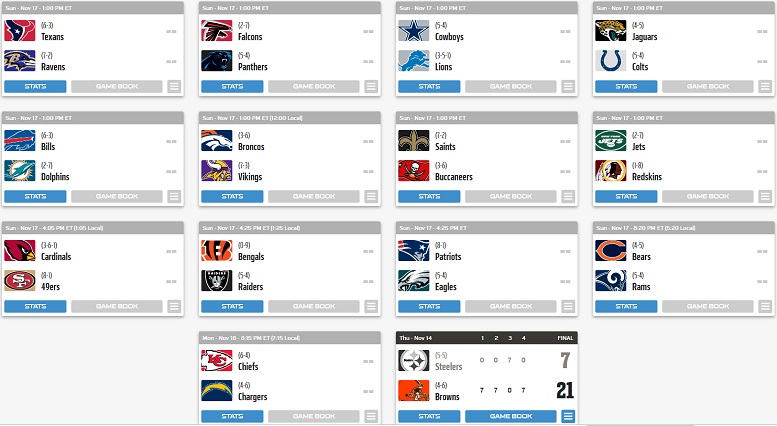 The Pittsburgh Steelers dropped back to .500 Thursday night with their road loss to the Cleveland Browns and now we sit and wait to find out how much ground they’ll lose in the AFC standings and to whom. Scoreboard watching isn’t popular with everyone, but if you are one of the many who partakes in such things that you have no control over, below is your rooting guide for the rest of the Week 11 games if you’re a fan of the Steelers.

The Steelers beat the Colt’s a few weeks ago so they now own any head-to-head tiebreakers. That said, the Colts enter their Sunday home game against the Jaguars as the No. 7 seed in the AFC and one spot ahead of the Steelers thanks to what transpired Thursday night in Cleveland. While the Jaguars are still very much lurking in the AFC playoff picture with a 4-5 record, Steelers fans probably want to pull for them to beat the Colts Sunday afternoon.

The Bills, fresh off a Week 10 loss to the Browns, enter their Sunday road game against the Dolphins as the No. 5 seed with a 6-3 record. After losing their first seven games of the regular season, the Dolphins have posted back-to-back wins in their last two games. Can the Dolphins make it three in a row on Sunday against the Bills? I wouldn’t bet against that happening and if it does, the Bills will fail to take advantage of the Steelers Thursday night loss. Pull for Miami in this one to take down their division rival.

Can the Bengals finally get their first win of 2019 on Sunday against the Raiders? It’s doubtful, but that’s why they play the games. The Raiders are obviously heavy home favorites in this game so it might take a small miracle and several Oakland turnovers for them to pull off an upset. Even though it’s unlikely to happen, go ahead and pull for the Bengals in this one because of Oakland entering this game as the No. 6 seed in the AFC following the Steelers Thursday night loss.

The Chiefs, who entered Week 11 as the No. 4 seed in the AFC, have lost two of their last three games and even their contest last Sunday against the Tennessee Titans with quarterback Patrick Mahomes back from his injury. The AFC West is still up for grabs for three teams with the Chargers being one of them. If the Chiefs beat the Chargers on Monday night, Los Angeles is pretty much out of the picture. However, if the Chargers win, the Chiefs would remain in striking distance of the Steelers. With the Steelers owning tiebreakers over the Chargers due to beating them several weeks ago, pull for Los Angeles to knock off the Chiefs Monday night at home. 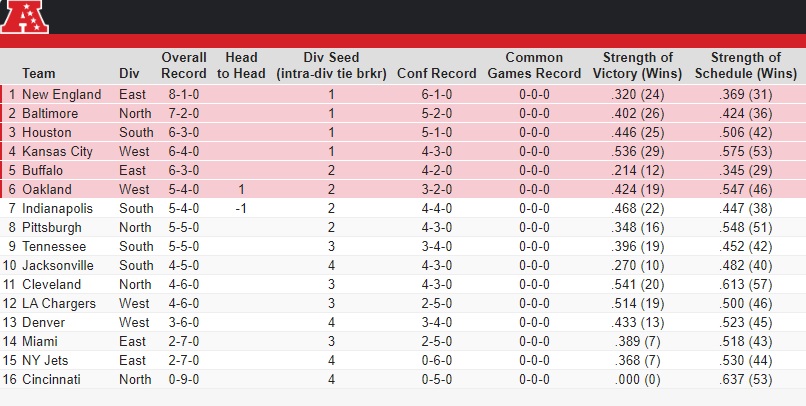