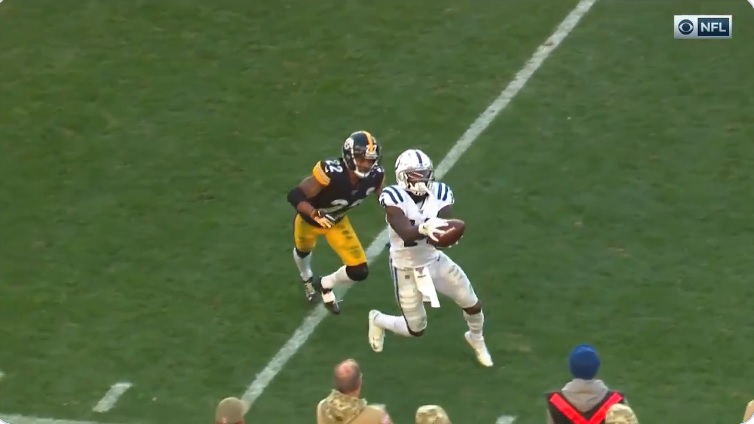 Winners and losers from the Pittsburgh Steelers 26-26 win over the Indianapolis Colts on Sunday afternoon.

James Washington: By far, the best game of Washington’s career. Made a combative double-catch on third down, a sick one-handed grab on a poorly thrown ball by Mason Rudolph, and a 4th quarter, 40 yard grab. Showed off his blocking last week but came through with what the Steelers drafted him to do. Catch the ball.

Minkah Fitzpatrick: Today proved the risk in trading next year’s 1st round pick for him was well worth it. His INT was his fourth as a Steeler, the first to do that since Troy Polamalu in nine years, and the pick six was obviously a massive play. The Steelers finally have a true playmaker in their secondary. What a time to be alive.

Bud Dupree: One of Dupree’s best games too. Two sacks against a quality left tackle in Anthony Castonzo, one of which forced a fumble. No arguing he’s taken his game to new heights and whether it’s Pittsburgh or one of the other 31 teams, someone will pay him handsomely this offseason.

Chris Boswell: If you clicked on this post right after the win, I know, I know, I missed including him initially. But he was awesome today with the offense struggling to finish drives. That 51 yarder was money. Great job, Boz.

Linebackers In Coverage: Specifically, Devin Bush, but no one who wore a 50 or 90 did well in coverage today. Bush was picked on early against Jack Doyle, a much worse athlete, but ran a great route to create space and win the route for a touchdown. Lot of work to do against teams with quality tight ends. And the AFC North is full of them.

Jaylen Samuels: Weird to find him on the list on a day where he set the record for most receptions by a RB but he rarely created, made anyone miss, was too indecisive (especially at the end of the first half), and fumbled on third down to give the Colts a fourth quarter lead. Some rust to shake off after missing time with his knee injury but this wasn’t a good outing, even if he was Rudolph’s trusty blanket most of the day.

Red Zone Performance: Big stat of the day. Steelers’ defense got a stop on the Colts’ first attempt of the day, holding them to three, but allowed touchdowns on their next three trips. On the other side of the football, Pittsburgh finished just 1/4.

Kick Return/Kick Coverage: Kick return game was trash. Blame Ryan Switzer all you want but the blocking was terrible and gave him no chance. Switzer averaged 20 yards on a pair of returns. Safety punt team did force a fumble but the kick coverage team allowed two sizable returns in the game. Both units gotta be better.

Randy Fichtner: Pulling teeth to get the offense to do something for much of the day. Rudolph had his issues and I’m excited to get into the tape to dissect them but definitely curious decisions on the play-calling end too. Conservative calls leads to conservative QB play.

Steven Nelson: Colts picked on Nelson more than any team has this year and this was Nelson’s worst game. The DPI was questionable, obviously, but he allowed an 18 yard catch on 3rd and 19 and a 1st down backshoulder throw immediately after the PI.

Mike Tomlin: Almost solely for that dumb challenge right before the two minute warning. No chance of winning it and he burned his second timeout with the Colts in field goal range. Just an idiotic decision. No way around it. Adam Vinatieri’s miss saved a lot of heat.