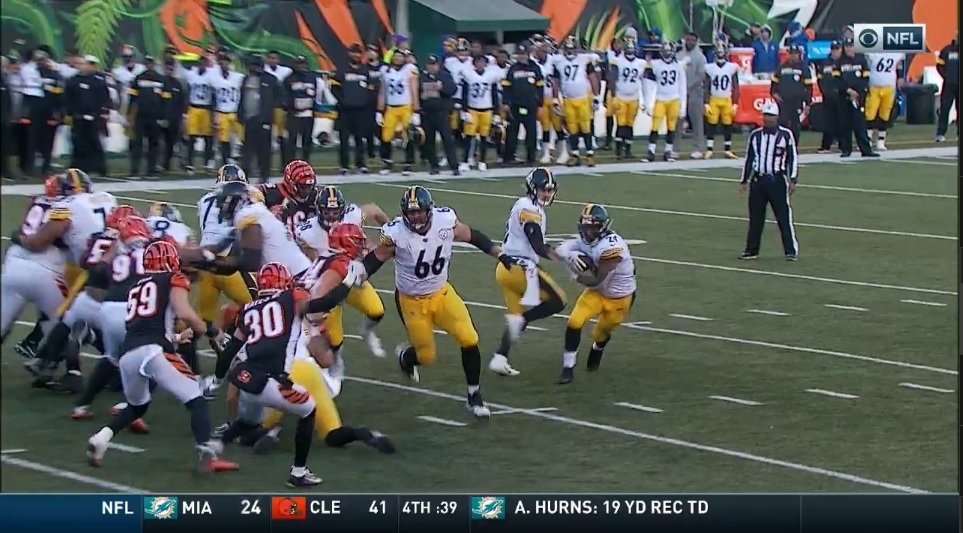 Pittsburgh Steelers running backs carried the ball 31 times in Sunday’s win over the Cincinnati Bengals. And a whopping 15 times, they used their power/gap scheme (backside guard pulling) to lead the way. The mentality? Keep doing what’s working until your opponent stops it. And the Bengals never did.

I combed through all the Steelers’ runs yesterday to break down how successful they were with this scheme. Here are the results, broken down by carries, yards, and first downs by each running back when running power.

I included the totals in the table too. 15 runs, 90 yards (6.0 average) and three first downs. The first downs are a little low, the Steelers had just seven on the ground in total, but there were plenty of big gains. Snell had carries of eight, ten, and 13 yards. Whyte Jr.? 21 and 16.

The final run of the game, the one which clinched it, was a Snell 13 yard run that come off power. David DeCastro, leading the charge, as he did on almost all of these schemes. 14 of the 15 runs Sunday came with DeCastro as the puller, averaging 6.2 yards per carry. Ramon Foster pulled once on a three yard gain by Snell.

We may do a deeper dive into the power scheme later in the week with the benefit of the All-22 but these gap runs have been a Steelers’ favorite for years now. Cincinnati failed to adjust, letting DeCastro get out on the edge, sometimes with no one to block, or the first defender in his path a lowly defensive back he could bully out of the way.

Pittsburgh’s unlikely to lean on these runs quite as often against Cleveland, simply because the Browns have better personnel (more gap shooters) and coaches to adjust but power will be key to an improved run game Sunday and for the rest of the year.