The results from today’s games certainly proved to be interesting, and it goes without saying that the Pittsburgh Steelers’ defense securing a win against the Los Angeles Rams was pivotal, but the way the dominos fell on this autumn day, Pittsburgh is now currently slotted for a spot in the postseason as the sixth season. 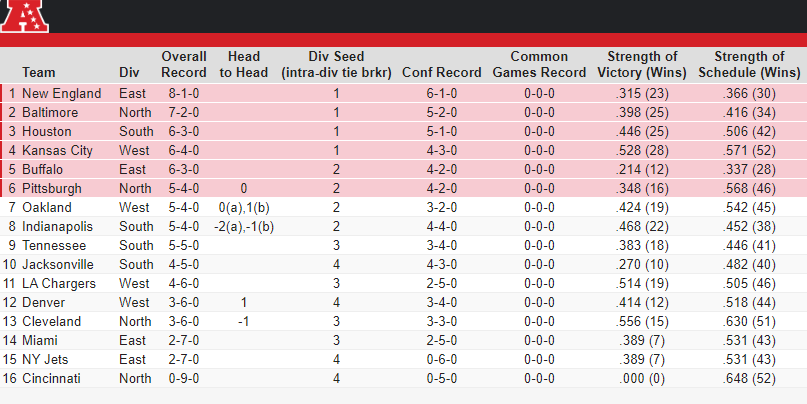 That’s a statement thought unutterable just a month ago, but the Steelers are currently riding a four-game winning streak, taking down the Los Angeles Chargers, the Miami Dolphins, the Indianapolis Colts, and the Rams now in succession.

The biggest win in that group was the victory over the Colts, because it provided the tie-breaker in a head-to-head scenario that they needed in the event that they lost another game. And they did lose again today. Before facing the Steelers, they were 5-2, but now 5-4 after dropping a result to the Dolphins, who are undefeated since Pittsburgh beat them.

Also in the mix are the Oakland Raiders, who have won each of their past two games to get back over .500 on the year, beating the Detroit Lions and the Chargers in that span.

That is conference record, and the Steelers are 4-2 in AFC play, having lost to the Seattle Seahawks and the San Francisco 49ers among their four losses. Things can change because the Raiders are only 3-2, tied in the loss column, but the Colts are 4-4 in the AFC.

The next step after head-to-head—the Steelers and Raiders don’t play this year, so that will never come into play—and conference record is record in games against common opponents. So far, the only two common opponents they have faced are the Colts and the Chargers. Both teams are 2-0 against such opponents.

Over the remainder of the season, however, the Raiders will face the Cincinnati Bengals, the New York Jets, and the Chargers again, so that will add to the common opponents tiebreaker.

If it gets down further than this and they’re still tied, however, the Steelers could be in trouble, because strength of victory is next, and the teams they’ve beaten have just a combined 16 wins, while the Raiders’ victories amount to 19. The Steelers only play two more winning teams, so they had better hope the teams they’ve beaten start winning.

Let’s just hope, of course, that it doesn’t come to that. Ideally, the Steelers will create their own luck by continuing to win. They can also help out their own cause by beating the Buffalo Bills, who are in position for the fifth seed and now just one game ahead after losing to the Cleveland Browns.