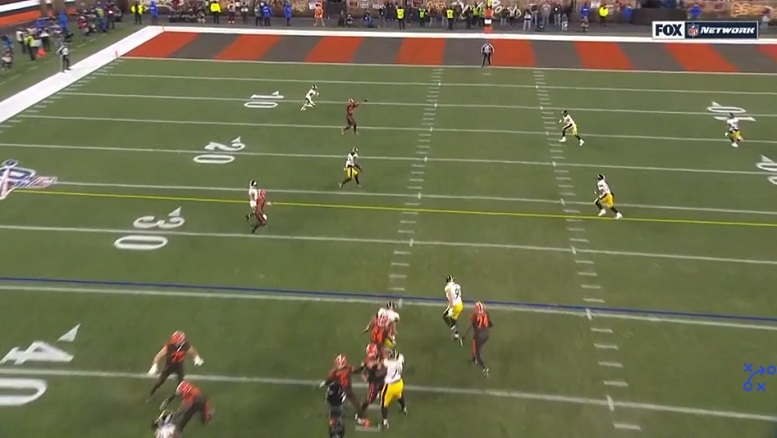 While the Pittsburgh Steelers defense certainly shouldn’t shoulder a main portion of the team’s Thursday night road loss to the Cleveland Browns, the unit did spring a few leaks in their secondary throughout the contest with a few of those leaks being the explosive play variety.

The Steelers gave up four explosive plays Thursday night to the Browns offense and all four were pass plays with two of those resulting in gains of over 40 yards, a double explosive play. From Week 3 through week 10 the Steelers defense had allowed just 18 total explosive plays after allowing 12 in their first two regular season games against the New England Patriots and Seattle Seahawks. Additionally, prior to Thursday night the Steelers hadn’t given up a play of 40 yards or longer since Week 1 against the Patriots when the unit allowed two of them.

The first Browns explosive play Thursday night against the Steelers defense came on a third-down and 8 from the Cleveland 37 yard-line with 12:11 left in the first quarter. On that play, Browns quarterback Baker Mayfield broke pocket containment to his right and then proceeded to hit running back Kareem Hunt down the right sideline after he had turned his route up-field with the Steelers inside linebacker Mark Barron attempting to chase him. That play netted 20 yards and a first down.

The Browns second explosive play against the Steelers Thursday came on the next play after their first one. On that first-down and 10 play from the Steelers 43-yard-line with 11:34 left in the first quarter, Mayfield connected with wide receiver Odell Beckham Jr. deep down the middle of the field for a gain of 42 yards with cornerback Steven Nelson in coverage. It’s hard to tell for sure by the television angle but it looked like the Steelers ran 0-coverage on that play without an all-out blitz. Regardless, the Browns scored one play later to take a 7-0 lead.

The third explosive play allowed by the Steelers defense Thursday night came with 13:19 left in the second quarter and on a second-down and 10 play from the Cleveland 23 yard-line. That play featured Mayfield, off some creative play action, connecting deep down the right side of the field to wide receiver KhaDarel Hodge for 41 yards with cornerback Mike Hilton in coverage. That coverage looked to be cover-1-man robber. Mayfield bought time by faking out outside linebacker Jayrone Elliott with a pump fake.

The fourth and final explosive play allowed by the Steelers defense Thursday night came just two plays after their third one. This time, however, Mayfield connected with wide receiver Jarvis Landry on a deep post route that split a two-deep cover-2 shell.

Those four explosive plays resulted in 129 yards and Mayfield finished the game with just 193 passing yards. From the moment the Steelers defense allowed a touchdown pass a few plays after giving up the fourth explosive play, the unit played well. After all, the Steelers defense only gave up 14 points until a late offensive turnover deep in Pittsburgh’s own end resulted in a Mayfield’s second touchdown pass of the game with 5:25 left in the fourth and final quarter.

After their mini bye week, the Steelers will face the currently winless Cincinnati Bengals. Hopefully the defense can revert back to being a unit that doesn’t give up too many explosive plays in that game and especially the double explosive variety.