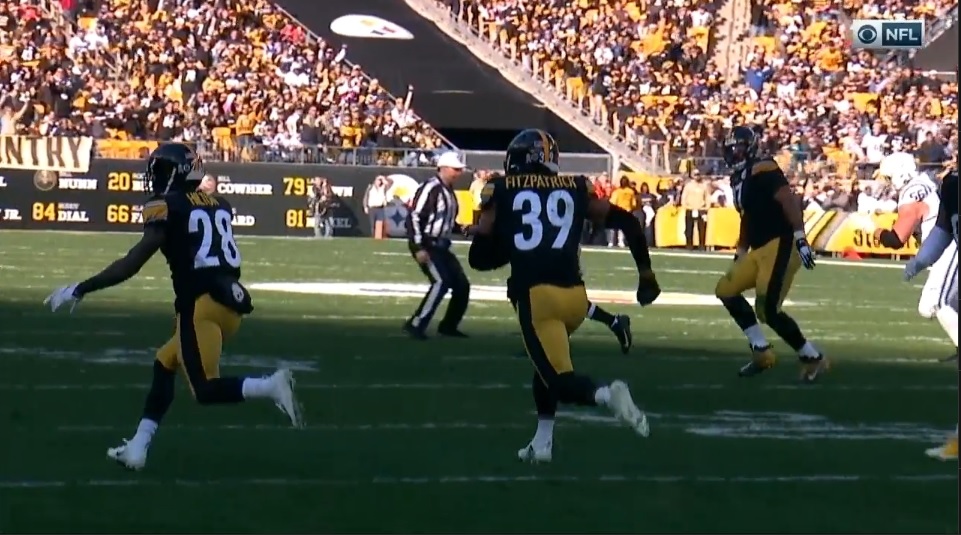 – Something about all-time good Colts’ kickers when they play Pittsburgh. Mike Vanderjact wide right from 45 yards in 2005. Adam Vinatieri wide left from 43 yards in 2019.

– Of course, you can’t talk about this win without talking about Minkah Fitzpatrick. He’s the first Steeler to have four interceptions in a season since Troy Polamalu had seven of them in 2010. As we wrote in June, that was the longest drought in NFL history. And I mean ever, active or not. Incredible.

He’s the first Steelers DB with an interception in back-to-back games since Cortez Allen did it in 2014.

And Fitz’s 96 yard pick six was the third longest in Steelers’ history. He joins some pretty good company. James Harrison’s 100 yard pick six in the Super Bowl and – you guys know I’m geeked anytime I get to reference the 1930s – Martin Kottler’s 99 yard pick six in 1933. Kottler’s score was the first touchdown in franchise history.

– Jaylen Samuels’ 13 receptions set a franchise record for catches by a RB. Of course, that was an unlucky 13, fumbling on his final grab. Le’Veon Bell had 12 grabs in a 2017 win over the Green Bay Packers.

–  Trey Edmunds had 10 career carries before today. He finished Sunday with 12.

The last time Edmunds had 12 carries in a game? Gotta go back more than five years ago. 12 rushes for 54 yards as a member of Virginia Tech in their win over North Carolina. On the other side, Ryan Switzer caught five passes for the Tar Heels that day.

– Pittsburgh’s on pace for 58 sacks. That would be a franchise record since the stat has been officially tracked in 1982.

– Jordan Berry and the Steelers punted just once today. First time the team’s been able to do that since a 2016 win over the Cincinnati Bengals. Since 2000, the Steelers are 15-0 when they punt one or fewer times.