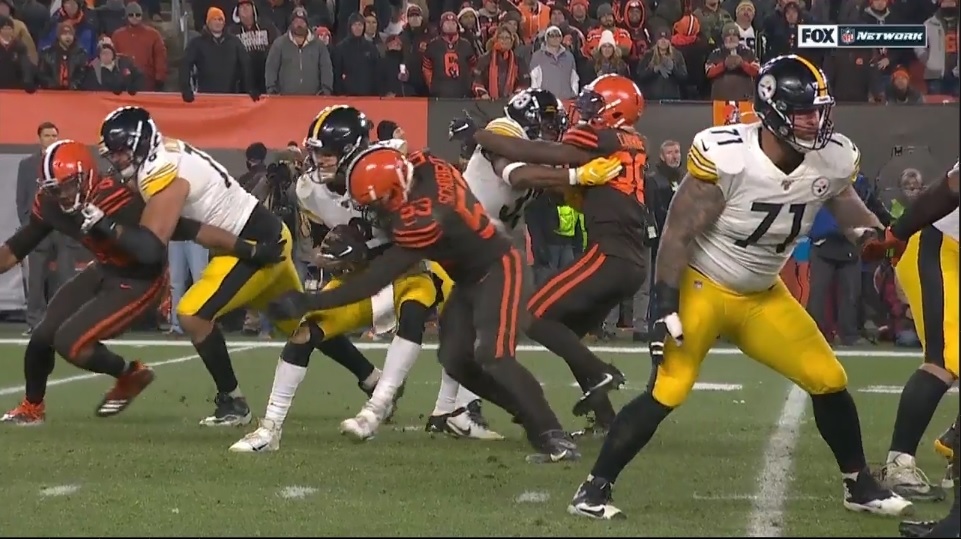 Our busiest such article of the year. Breaking down the four sacks the Pittsburgh Steelers allowed Thursday.

This one, like the entire game, is messy. Ar first glance, it looks like the sack is on Jaylen Samuels. He seems late to pick up #31, the defender who strip sacks Mason Rudolph. He didn’t pick up his man, right?

This one is actually on Ramon Foster. You gotta be decisive in pass protection. Make your choice of who you’re picking up and stick with it. He doesn’t do that here. Foster initially gets into his pass set and uncovered, since #91 slanted away from him, and looks to pick up #31. Watch where his eyes are at. 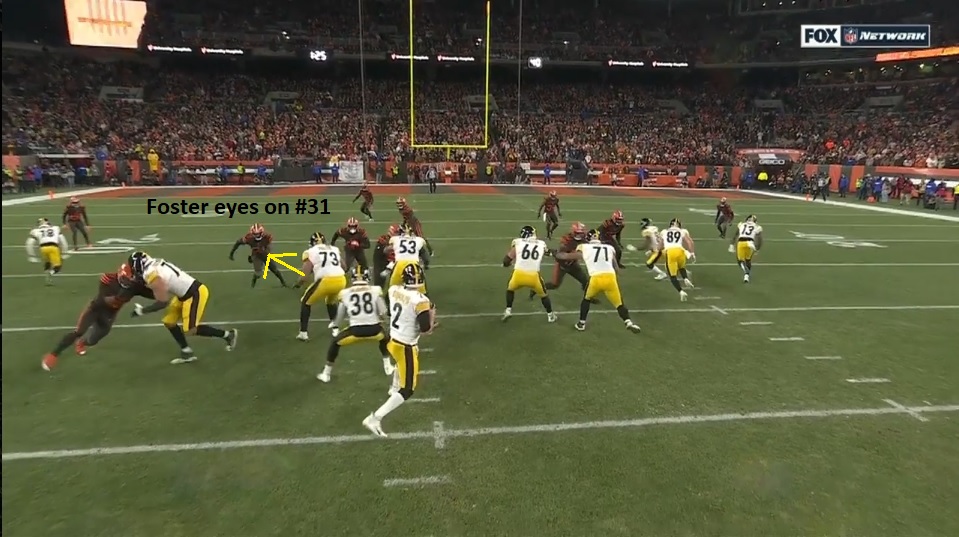 So Jaylen Samuels, reading Foster slide to his left, gets his eyes on #51. Foster should pick up #31, Samuels on #51. All blocked up.

But Foster flips the script. He slides back down, deciding to take #51, leaving #31 free. Samuels doesn’t adjust in time, tries to change course and take #31, but it’s too late. Sack, fumble, Steelers out of field goal range. 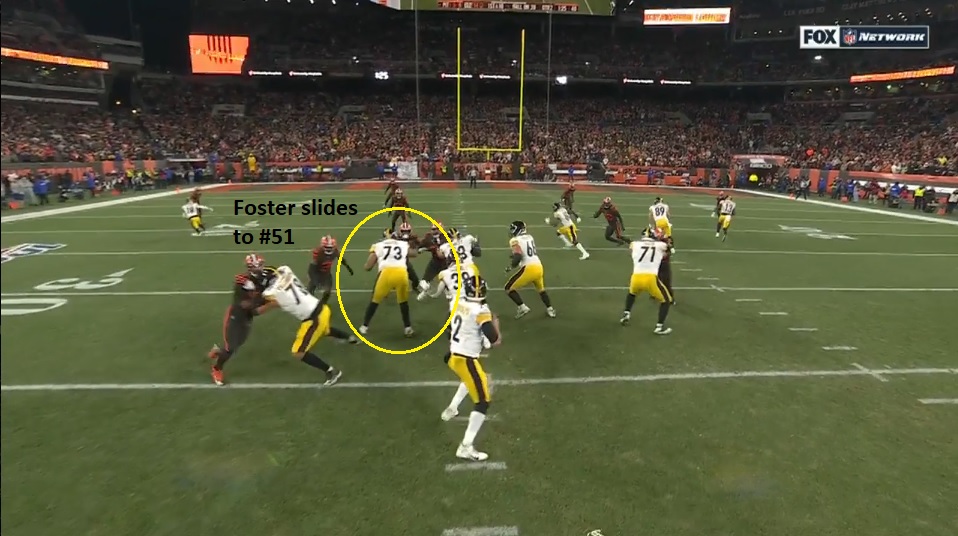 Ideally, yes, Foster should take the linebacker, Samuels the DB. But it’s more important to be decisive than 100% textbook and the miscommunication here leads to the sack.

Before you say something, yup, Alejandro Villanueva got destroyed here by Myles Garrett. That may have eventually caused a sack but #31 got there first. So that’s where the focus is in the strict sack breakdown scope.

This one is a little more obvious. #92, Chad Thomas, working on Matt Feiler to the right side. The chip here from RB Trey Edmunds might’ve actually hurt in a sense but Feiler has to know he’ll have outside help and not open his hips as much as he did. Anchor inside to take away the inside move. 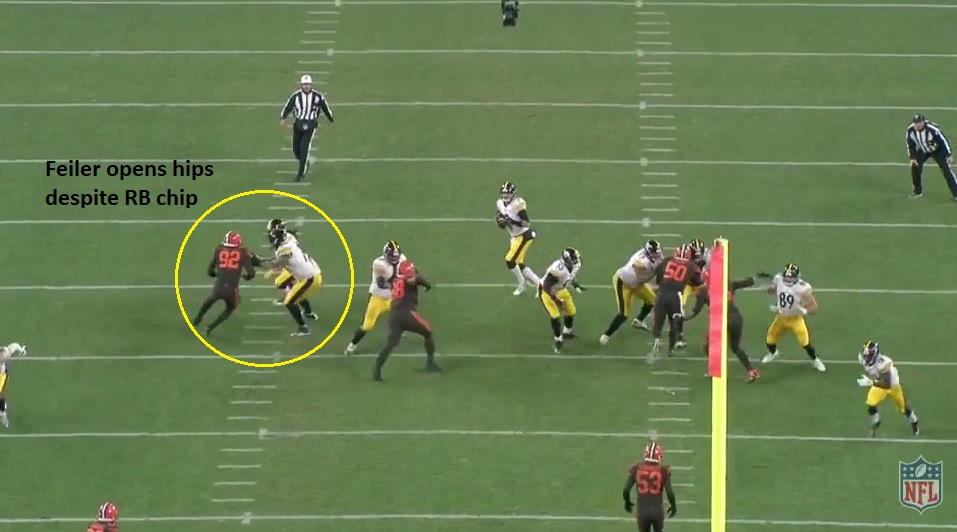 Thomas swims over, Feiler isn’t athletic enough to mirror and recover (Thomas does seem to stun Feiler in the facemask with a swipe, I know), and down goes Rudolph again.

Stunt that doesn’t get passed off well here. Half slide by the offensive line. First man uncovered begins the slide, meaning Maurkice Pouncey (uncovered) slides left while David DeCastro and Feiler man block to the right.

Browns run a T/T stunt with their interior linemen. Because Pouncey and DeCastro slid away from each other, they have trouble communicating and passing it off. DeCastro can’t squeeze the gap in time to pass it off to Pouncey (you only work to the looper once the crasher has been picked up) and by the time he does, DT Larry Ogunjobi has dipped pass and crashes down on Rudolph. 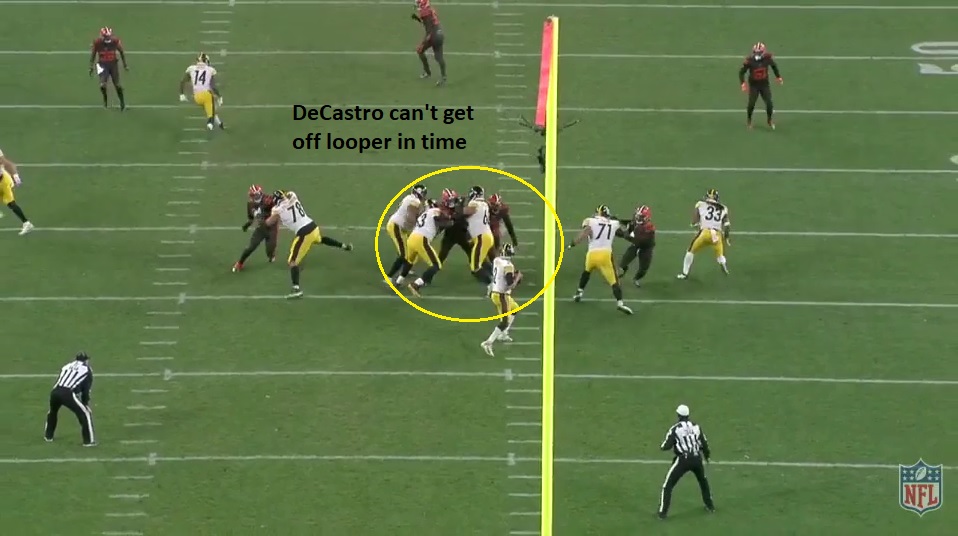 Bit of bad luck here, nice execution by the Browns, but we’ll put half the blame on Pouncey, half on DeCastro.

Blame: Half on Maurkice Pouncey, half on David DeCastro

The very next play. Nice fire zone blitz from Cleveland, taking a page out of the Steelers’ old playbook. Drop the LDE/LOLB, slant the strong side 3T down, and overload the offense’s right side with a LB and DB. Trey Edmunds is now 1v2 and though he picks up the wrong player (should’ve taken the most inside defender) it doesn’t really matter.

Foster probably should’ve been more aware with the tackle slanting down but again, with the slide, he’s gotta help protect against any inside rush. If the line slides the other way, they pick it up, so I’ll give some credit to a good defensive scheme from the Browns, too.

Blame: Half on Foster, half on good scheme