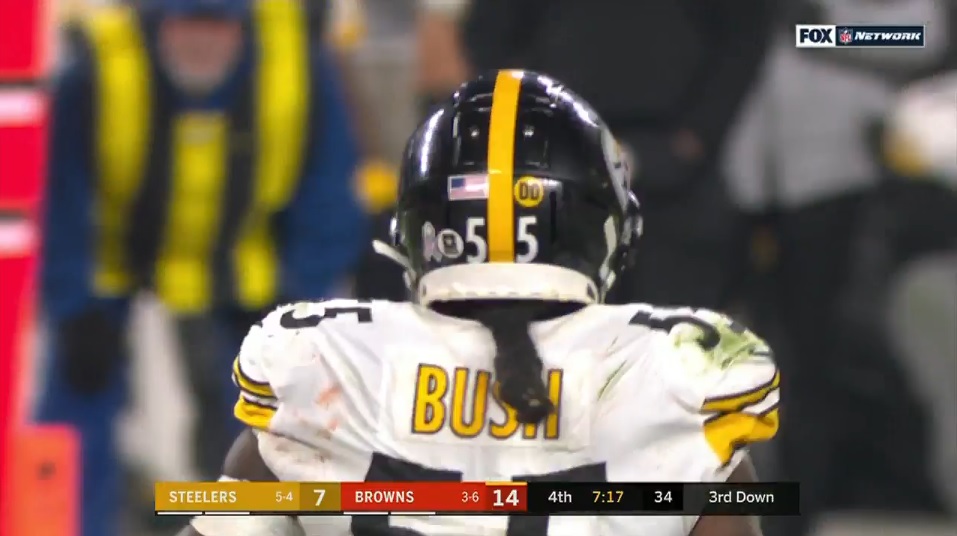 Devin Bush/ILB – After playing just 45% of the snaps last week Bush was closer to his norm playing 77% against the Browns. He finished the night with five tackles including one for loss while allowing two receptions on three targets for 4 yards. He was also used to blitz at least three times something I don’t recall him doing a lot of up to this point.  Two plays stood out both in the passing game.

His reactions against the run and his coverage abilities in the slot on and on runners out of the backfield are so much better than they were earlier in the year. It seems the game has slowed down for him and I think it’s time for him to be left on the field for all situations.

Here is lined up over the slot WR and is going to show athleticism and balance to avoid the cut block of Jarvis Landry (80) and make the tackle on a 3 yard gain.

Next, he starts out on the near hash and is going to slide to his right with the fake to the RB. Baker Mayfield (6) avoids Mike Hilton (28)in the backfield that same running back Kareem Hunt (27) is going to work back to the far side on in the scramble drill and receive the ball. Bush is going flash his open field speed to run from nearly one set of numbers to the other to make the tackle for a loss.

Diontae Johnson/WR – Like the rest of the offense Johnson had a slow night registering 2 receptions on 4 targets for 17 yards. His biggest gain came on a 13 out route where he ran up the toes of the defender before breaking out for and easy 13 yard gain. He took over the punt return duties with Ryan Switzer being put on IR and had one return for 10 yards making a smart play to get what he could run across the field and then getting down.

Mid way through the third quarter he was struck with a helmet to helmet shot from safety Damarious Randall and had to leave the game with the help of trainers a blood tricking from his ear. He is currently in concussion protocol.

Isaiah Buggs/DL – Buggs got his normal amount of playing time getting 10 snaps in the defensive line rotation.  That elusive first tackle has been just out of his reach and he was close again in the game. As I’ve stated here before he’s not hurting himself either. He has been up to task in his opportunities.

He was late to the field on a goal line defense in the second quarter but no damage was done on the play. He tried a rip move on a pass rush that was ineffective and needs to work on his bull rush technique. He has the strength to move players but his hand placement and leverage is off a bit.  I hope he gets in Cam Heyward’s ear to learn from him.

Tony Brooks-James/RB – As mentioned Switzer was put on IR so Brooks-James got his chance as the return man on kickoffs. He looked a little nervous on his first return getting straight up field, protecting the ball but didn’t try to create anything. He second he tried to work to his right across the field. The good news is he as consistent on his returns. He made clean catches got up field and got what was there.

The bad news is that consistency was two 16 yards returns and the blocking wasn’t good again. Unfortunately for him, his performance wasn’t good enough to keep him on the roster as he was cut on Saturday.