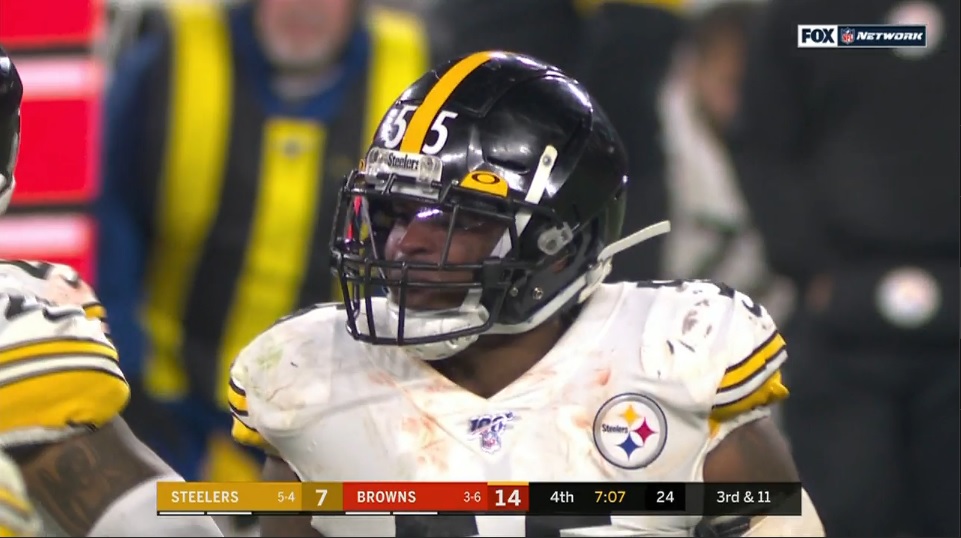 Devin Bush is off to a really good season. The turnover numbers have slowed a bit, that’s natural, but he’s been as advertised through his first 11 games.

One play in the fourth quarter of Thursday’s ugly loss to Cleveland reminded me of that. The traits that made Bush a blue-chip prospect, one the Steelers liked so much they made the rare move to trade up ten spots to select him.

On 2nd and 10, Baker Mayfield threw a busted screen to RB Kareem Hunt. Bush read it the whole way, took off at Mach 5 speeds, with a great angle across the field to drop Hunt for a one yard loss. Here’s a look at it from the end zone view.

This play has everything. Processing and anticipation, the angle to the ball, maintaining inside/out leverage the whole way, burst and acceleration, and the ability to close and finish the play. He got there before TJ Watt, who was originally closer to Hunt than Bush was.

Turns into a one yard loss, sets up 3rd and 11. Mayfield throws incomplete, the Browns punt, and the Steelers’ offense got the ball back still down one score in the fourth quarter.

That’s a special, special play. It doesn’t look as gaudy in the box score compared to an interception, forced fumble, or sack, but that’s something very few guys in football can do. Certainly no one else on the Steelers’ roster. I know the comparison is worn out but that’s a Ryan Shazier type play. To have an athlete, one at linebacker, who can move like Bush did? Crazy. And I can’t wait to watch Devin Bush make more plays like that for a long, long time.