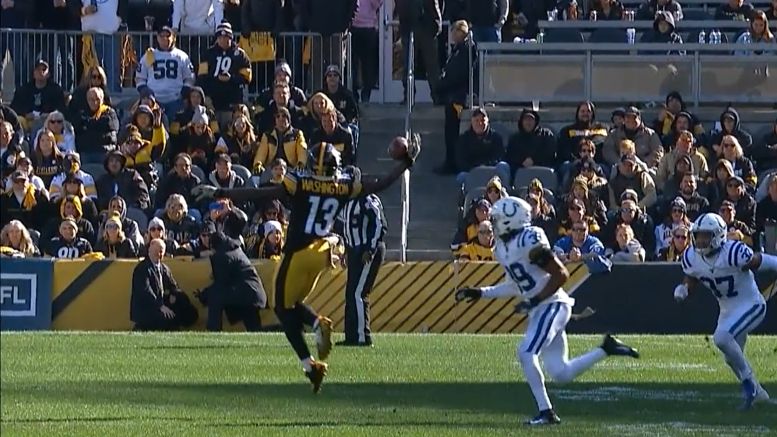 The Pittsburgh Steelers have in recent years become a team who holds a preference for carrying six wide receivers over their 53-man roster, though one of them is typically geared more toward participating on special teams, with one of them being inactive under normal circumstances.

With last week’s waiver of veteran Donte Moncrief, they are down to five, however, and two of them—Ryan Switzer and Johnny Holton—only have small or virtually non-existent roles on offense. The passing game, at least as far as the wide receiver position goes, has been driven almost entirely by their top three guys.

JuJu Smith-Schuster is on top of the list, of course, but there are two young guys behind him, even if technically both of them are older, who are trying to fight for that number two role. Rookie Diontae Johnson has so far been the more consistent and more productive, even with two fumbles, but second-year James Washington helped strengthen his case with a career-best showing on Sunday.

In the Steelers’ win over the Indianapolis Colts, he caught four passes on four targets for 69 yards, and all of them were seemingly either with a high degree of difficulty or big, clutch plays. He capped it off with a 40-yard pass, one of multiple receptions he caught in traffic.

Said Smith-Schuster, “he’s a guy who can always make plays”, according to Ray Fittipaldo of the Pittsburgh Post-Gazette. “We just have to get him the ball more”. Considering the fact that four receptions established a new career-high for him, it’s fair to say that they can get him the ball more frequently.

Following his big game, Washington now has 14 receptions on the season for 230 yards, though he is still searching for his first touchdown, and just the second of his career. He is only on-pace for 28 receptions for 460 yards, at the moment, but considering the tumult at the quarterback position, there is reason to believe that everyone’s numbers—sans perhaps the running backs—will trend upward in the second half of the year.

“I just have to stay focused and locked in”, Washington said, “because you never know when the ball is going to come your way”. Or, for that matter, in which direction. Mason Rudolph didn’t always deliver the best passes in his direction, but he was able to bring them all in.

If he can emerge as a more impactful player in the second half of the season, that would be a huge boon for the offense, to have three wide receivers not only capable of going off in any game, but also having shown it on tape, forcing defenses to play them accordingly.