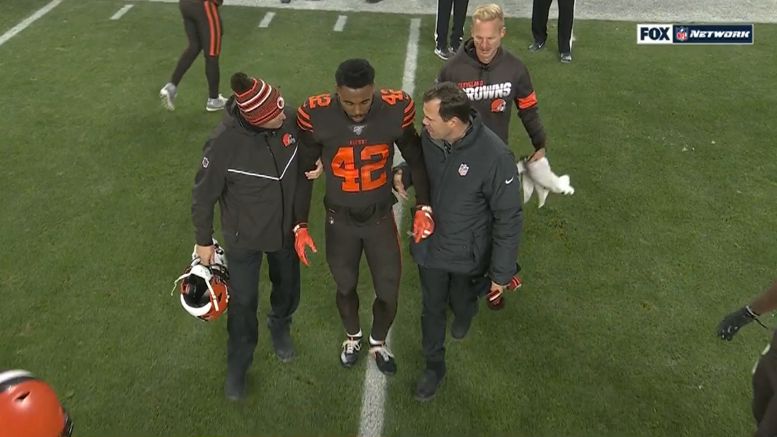 Just when he was getting going, his season is over. No, I’m not talking about Myles Garrett, but I am talking about another Cleveland Browns defender, and in this case, a former member of the Pittsburgh Steelers in safety Morgan Burnett. The 10th-year veteran suffered a torn Achilles during the Browns’ victory over the Steelers on Thursday night, and is obviously out for the remainder of the year.

The 30-year-old safety was having his best game of the season, recording an interception—his first since two teams ago, when he was still with the Green Bay Packers in 2016—in addition to five total tackles, with two passes defensed. He had a big stop on fourth down during the game as well.

Prior to the game against the Steelers, he also registered a season-high eight tackles in the Browns’ important win over the Buffalo Bills, which ended a four-game losing streak. Now with two wins in a row, they are at 4-6 on the season and on life support in terms of retaining playoff hopes.

But with Garrett’s season-long suspension and Burnett’s season-ending injury, their defense just took two big hits that they probably can’t afford. If they have any hope of nudging their way into the playoff discussion, then it’s going to have to be the offensive side of the ball that picks things up.

Burnett was the 71st-overall pick by the Packers in the 2010 NFL Draft, and started the four games that he played in as a rookie, winning the Super Bowl over the Steelers that year with the team. He had been a full-time, every-game starter for the entirety of his career up until 2018.

That is when he signed a free agent contract with Pittsburgh, and he was their big ‘splash’ move in free agency after releasing Mike Mitchell. The expectation was that he would serve as a bridge starter while they groom and develop a draft pick, and that’s how things would have gone down, likely, if not for his very frequent injuries.

He ended up missing so much time in the offseason, preseason, and training camp, that he started the season rotating behind rookie first-round pick Terrell Edmunds in the opener, then started in Week Two and got injured, missing the next four games.

He would never get his job back, reduced to working as a dime backer, which is a role they knew he may play for them, but he was unhappy with how the Steelers were using him, so he asked them to release him one year into a three-year deal.

The Steelers obliged, and he signed with the Browns this offseason, I believe to a two-year deal, and he has been an every-game starter for them, minus two games due to injury. He recorded 41 tackles with an interception and two sacks. Now he has to battle back from a significant injury.